Many of society’s most pressing problems are long-term policy challenges, lasting a generation or more. Policymakers and business leaders often face strategic decisions with uncertain future outcomes. Despite numerous unpredictable factors, decision-makers need to be confident that they can achieve specific outcomes. Failing to do so could result in systemic failures with major consequences for society. The European Environment Agency (EEA) undertook analyses through the BLOSSOM project (Bridging long-term scenario and strategy analysis: organisation and methods) to identify a ‘toolbox’ of approaches to institutionalise long-term futures thinking in government; to explore which countries have introduced respective approaches and tools, and to identify the pioneers as well as which methods have become commonplace and which have not; to look for commonalities and differences and identify the factors that can explain the success or failure of efforts to embed a long-term perspective in policymaking.

Why Bring Foresight to Environmental Policymaking?

While academic literature has thoroughly assessed the pros and cons of different methodological approaches, systematic analysis of the use, impacts and effectiveness in environmental policymaking is still superficial or absent. It is evident that the institutional and governance aspects of foresight work need to be given more attention. We also need new structures that break with single forecast models, which miss the complexity and uncertainty in future developments, and different institutional arrangements to implement them. For future studies to gain greater relevance in policymaking, there are also two science-policy challenges that have to be tackled: policymakers often perceive future studies to be evidence-based and the time scale of future studies differs from that of policymaking.

The characteristics of the problem-solving context make it very hard to introduce the long-term perspective needed to analyse environmental problems. However, futures thinking and foresight is increasingly being used to inform policy, through the use of techniques such as expert panels, workshops and scenario planning. Explorative or normative scenarios are often used for long-term futures thinking whereas for more short-term purposes predictive techniques such as forecasts and outlooks are more common.

Analysis of Success Factors and Barriers

The analyses proceeded in two stages. In the first stage in 2008, the EEA started to analyse the success factors and barriers to a long-term perspective in public policymaking with particular reference to environmental planning. The EEA report Looking Back on Looking Forward (EEA, 2009) — a precursor to this study — reviewed the available evaluative scenario literature. The research found that only a few studies evaluated the actual impact of scenarios. Most of those studies found that scenarios were indeed useful in preparing corporate strategies and public policy, although most focused on the business sector. Moreover, the public sector presented several difficulties, including the varied set of goals and interests that public agencies face. The research concluded that more empirical evidence is needed particularly on what types of scenarios work in different contexts and the institutional arrangements that enable scenarios to be used more effectively in order to demonstrate that scenarios can deliver on their promises.

The second stage focused on analysing the role and relevance of futures analysis and the practical experiences with adapting institutional arrangements to embed a longterm perspective in government in EEA member countries. Country case studies were developed for eight EEA member countries based on interviews with practitioners in government, administration and policy advisory bodies along with a review of relevant academic and nonacademic literature. During 2010, four additional case
studies were included following the same approach. The project involved consultations on draft case study country reports and the comparative analysis report with the interviewees and other stakeholders in all the countries studied. In the later stage, additional consultations took place with the EIONET network of experts. Upon completion of the case studies, the crosscutting report analysed the key findings and presented a crosscountry comparison (available at http://www.eea.europa.eu/publications/blossom/).

Focus on Institutional and Governance Structures

The research did not seek to evaluate the quality of individual futures studies or to explore the whole range of futures work (such as research or technology foresight). It only addressed the aspects most relevant to environmental policymaking, notably the institutional and governance structures.

Design and Analysis of the Country Case Studies

The case study countries were selected to provide a range of cultural, geographical, institutional and administrative approaches, including countries that were at very different stages of implementing futures thinking. Detailed case studies were compiled and informed by interviews with senior officials in the respective member states. Following the production of individual country case study reports, SWOT analyses were undertaken for each country, providing the analytical framework for understanding which factors facilitated knowledge exchange from futures studies or research into practical policymaking in each country. These were then presented for each country as SWOT-tail diagrams. SWOT-tail© diagrams combine fishbone (Ishikawa) diagrams with SWOT analyses to provide a visual and concise summary analysis for each country. Clearly, there is no ‘one-sizefits-all’ solution; context and path dependency matter.

Development of Futures Thinking over Time

Commonalities and Diversity among Approaches

As noted, the country case studies analysed institutions, mechanisms and processes, and facilitated comparison between country approaches. This showed which approaches and structures were most and least common. A central foresight body, thematic studies and some use of scenarios in policymaking were all seen in 10 out of the 12 countries studied. However, less common were formalised foresight reporting requirements (5 countries), routine stakeholder involvement (5 countries) and horizon scanning formally in place (3 countries).

Futures work and how it relates to environmental policy was classified by its ‘maturity’ into the categories mature, developing and nascent (see Figure 1). Futures work was considered most mature where it could mostly draw on permanent and formalised systems, diverse networks across levels of government and departments, and where experience of futures studies had a clear influence on policy. The category developing was applied where some features of futures work had been introduced and futures arrangements show evidence of lasting structures and influence. Futures work was considered nascent where futures arrangements were in their infancy, i.e. mainly ad hoc or fragmented, or where institutional structures or governance arrangements to facilitate futures thinking in policy at the level of national government has only recently been introduced. 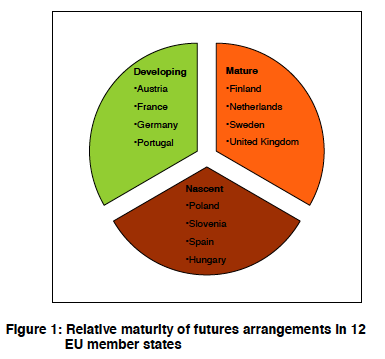 Parliamentary body/role of parliament: Some of the case studies, notably Finland, have shown that parliaments can play an important role in supporting futures thinking.

Internal body: In most countries, some form of futures work is performed in government departments (whether regularly or ad hoc) although not all have a central body that coordinates or advises across all areas of government.

External body: In the Netherlands and United Kingdom, no single centralised body deals with foresight. There are a number of external bodies/agencies that engage in futures work. In Slovenia, the Bled Strategic Forum, which works on long-term thinking at national and European levels, has sponsored debates about long-term futures, drawing thinkers from politics, industry and academia from all over Europe.

Routine stakeholder involvement: The degree of consultation varies between countries, with Finland and Austria at one end of the scale with a high degree of participation and France on the other with comparatively little. Generally, the foresight topics are determined through consultations with expert stakeholders. Stakeholder participation is widespread among most futures programmes across the member states studied and driven by policy needs.

Thematic or sectoral: Cross-sectoral studies appear to be more common in the environmental sphere, even in countries that undertake both types.

Formally independent body/degree of independence: Trade-offs between access and independence are dealt with in different ways across countries. In most countries, this is somehow related to how the governmental institutions work.

Permanent or ad hoc arrangements: In general, the most effective bodies for futures studies have had a permanent role and structure within government. Some countries have created ad hoc groups for specific studies.

Political support and policy needs: A further element that can shape the approach to futures thinking is the specific need in the policy sector (Netherlands, Poland, United Kingdom, Germany) or influenced by work in other countries (France inspired by Finland, Hungary by the United Kingdom). In all four countries with nascent futures systems — Hungary, Poland, Slovenia and Spain — advanced technology foresight work in other countries has been prominent. Another important criterion for embedding futures work in policymaking is a government policy calling for the use of futures studies.

Follow-up: The use of follow-up and feedback to futures studies seems to support the successful implementation of futures thinking in policymaking.

Policy demand and political support would appear to be overwhelmingly the most significant factor.

Need for policy-led futures thinking: policy interest and support may be key, and high-level ambassadors or ‘champions’ can help promote and influence the inclusion of futures studies in policymaking. High quality of studies helps to provide credibility and convince policymakers.

Resources: skills and capacity are required for a successful forward-looking programme.

Timeliness and relevance: to be taken up by policymakers, a futures study must be relevant to needs and available when needed.

Stakeholder engagement and participation: broad participation is an important success factor as it increases legitimacy and helps establish familiarity and understanding.

Potential role for parliament: Although parliamentary involvement is not necessarily a success factor, it may be important for facilitating democratic engagement in longterm environmental policymaking as well as a shift of futures work beyond a largely expert-driven process.

A major barrier, alluded to above, is the fundamental challenge for futures thinking in the science-policy debate and the dominant focus of government administration on electoral, legislative and budgetary cycles. Other barriers are:
· Departmental upheaval and reorganisation in the wake of establishing institutional arrangements for futures thinking
· Departmental silo mentality
· Lack of futures skills and awareness amongst officials and politicians
· Problems of scale: large futures studies can be unwieldy and miss their window of opportunity
· If not policy-driven, then futures thinking is unlikely to influence policy
· Cultural barriers (administrative traditions)

Rather than rely on a trickle-down effect, there are active efforts governments can make to improve the integration of futures thinking into policymaking. These actions should include:

· capacity building,
· knowledge brokerage through networks,
· coordination of futures work through networks across government: to avoid duplication, to facilitate crosssectoral (thematic) studies,
· institutional arrangements that create policy demand, for instance formalised requirements for futures thinking, building futures thinking into long-term strategy development, formalised reporting requirements on government policy and a parliamentary role for futures thinking,
· techniques for prioritising futures studies (from systematic horizon scanning to top-down and bottom-up stakeholder, public and parliamentary involvement in the prioritisation process),
· clarity on the distinction between policy-relevant futures work and more blue-skies academic futures work (the former responding to policy demand, the latter pushing the boundaries and development of tools, techniques and approaches);
· sufficient resources to build capacity, networks and institutional arrangements;
· increasing participation, including the broad public: new technologies and innovative methods could be used to bring in a wider and more diverse range of opinions and ideas, as well as to disseminate study results and their implications.

EEA, 2009, Looking Back on Looking Forward: A Review of Evaluative Scenario Literature, EEA Technical Report No. 3/2009.