The Club of Amsterdam set up an ‘Old and New Energy Lab’ designed to generate novel and potentially viable plans of action for dealing with energy issues by leveraging brainstorming methods to produce innovative thinking and bypass preconceived ideas and assumptions. The process tapped into the expertise of ‘thought leaders’ chosen for their diversity so as to maximise the fertility of discussions.

Lab Challenges to Think Outside the Box

Diminishing reserves of fossil fuels, climate change, geopo-litical factors and a wave of technological advances are bring-ing complex pressures to bear on the landscape of energy gen-eration and consumption. Change seems inevitable, but react-ing appropriately is a challenge. This is especially so when limited modes of supply and consumption have been en-trenched for extensive periods, as is the case with the energy landscape. This can make it very hard for people to think ‘out-side the box’ – arguably much needed at the moment.Thus the challenge addressed at ‘The Lab’ was to bypass pre-conceptions and traditional ways of thinking. Participants were called upon to brainstorm possibilities and then validate the resulting ideas with some tangible, realistic scenarios.

Principal approaches employed were Socratic discourse and a future scenario method. Participants were asked to identify a set of driving ‘values’ deemed desirable (e.g. equal access to resources, freedom, quality of life, stability etc.). Socratic dis-course and other techniques were applied to open up discus-sion to the broadest possible level. The outcome was the ob-servation of numerous facts, trends, constraints etc.
The resulting ‘facts’ were then fed into an analysis based on the future scenario method. The values identified earlier were used to drive the scenarios, which were to envision a positive future ten years hence (the goal being to identify possible so-lutions).
Four scenarios were created by choosing two drivers of change: governance and economy. Note that there is nothing absolute about the choice of drivers or even the number of drivers con-sidered, but these were the ones considered most important.
These drivers define the axes of a graph depicting four different environments (symbolized by the numbered circles in the diagram)derived from the possible combinations of extreme cases of both drivers. These environments provided the basis for the scenarios. 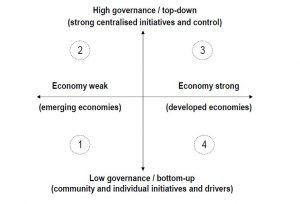 Keep in mind that these scenarios are not predictions but simply tools to guide discussion from exploration to identification of potential solutions and analysis of important trends and factors (political, cultural, technological, etc.) and their interactions.

Four scenarios were framed assuming environments as described in the methodology section. Remember that they are designed to be optimistic views of a situation ten years hence. Their creation allowed disparate ideas to be brought together in a framework where interactions and socio-economic and political realities could be considered.

Not all the scenarios were recorded in the same degree of detail. Different groups of participants chose different styles of presentation.

The environment envisaged was a poor, sub-Saharan country with village communities as the dominant settlement pattern, poor access to resources and minimal infrastructure. The village in this scenario was assumed to be remote but not overly far from a principal city.

The one plentiful resource is sunshine. New cheap photovoltaics and microloans allow the village to produce electricity. This gives rise to increased productivity and enables more flexibility in trading of staples such as vegetable and meat produce through refrigeration.

The small economic boost and decreasing costs of photovoltaics allow expansion of generating capacity. Direct energy sales become attractive in a future where fossil fuel is expensive and supplies unreliable and the village becomes a supplier of power from solar energy. Improved battery technologies and high fuel prices lead to more electric or hybrid vehicles. Households in and outside the village increasingly use batteries and pay for recharging.

The village has effectively shifted from subsistence agriculture to ‘farming’ sunlight, with batteries as the means of distribution.  The availability of power for transport attracts more vehicles and infrastructure improves. Then cables are laid to directly supply electricity to the nearby city. After all, the village now has the generating capacity, the expertise, and plentiful lowvalue land for expansion. Infrastructure experiences another boost, including communications. The village buys computers and the community now has Internet access. Educational opportunities increase dramatically. Over time the community becomes generally well-educated and thus capable of engaging in even more diverse and complex commercial activities.

Some time in the future (although maybe not in the ten-year frame), solar energy could be captured in a fuel created by artificial photosynthesis, allowing wider export of energy and opening up the solar farming model to more remote communities. This would require importing water (limiting displacement of battery use), but importing water is certainly preferable to importing oil in this (future) day and age.

This scenario assumed a top-down, centrally-organised society with an emerging economy. China was offered as an example, on the assumption that much of the traditional communist philosophy still permeates the government, which regulates the allocation of resources. Short-term (business) thinking is constrained for the benefit of the collective when it comes to something as fundamental as national energy supply.

The immediate need for more energy to support growth is urgent. Coal is abundant and coal-fired power stations proliferate, with little thought given to environmental concerns. But this is only the first, quick fix, part of the plan, which is also influenced by oil imports for vehicles, the need to transport energy over great distances and the fact that even coal resources have limits.

Coal-to-liquid processes are used to produce clean diesel to help ease the dependence on oil imports, while a massive research effort creates low-loss electrical transmission based on high-temperature superconductors (doubly important because of the chosen alternative to coal – photovoltaics).

Huge solar ‘plains’ grow in the country’s remote, arid and impoverished west, bringing employment and commerce. Ultimately, the technology becomes simple plastic sheets that can be rolled out and clipped together. They contain nano-engineered structures that exploit the highly-efficient initial step of photosynthesis but feed the liberated electrons into the superconducting transmission lines and on to the energy-hungry coast. China soon becomes a major exporter of these technologies.

In the cities of the East, electric and hybrid cars are encouraged and manufactured. Coal is increasingly used only to produce diesel and dependence on foreign oil now rapidly disappears.

Sweden, which aims to become oil-free by 2021, might be an example.

A progressively increasing carbon tax is introduced for individuals and corporations. A flexible power supply network allows individuals to avoid a carbon tax by purchasing energy from sustainable sources. This encourages development of such sources – from the logging and papermaking industries using waste to produce electricity, heat and biofuels, down to individual households generating energy and selling any surplus to the grid.

Central support and legislation for energy-saving technologies in housing and transport increases their uptake through various means. The carbon tax imposes a cost on manufacturers for the lifetime emissions of their products.  The tax alone triggers substantial change, but more comes through governmentdriven, large-scale geothermal, hydroelectric and combined heat and power schemes.

This scenario is one of change through popular movements. Analogies might be seen in the growth in the popularity of ‘organic’ produce or that of ‘fair trade’ products, both of which evolved out of grass roots concern. For instance, we can help the environment by buying local produce rather than that shipped great distances, or eating less meat (such unlikely action probably highlights limits to this approach). Other individual contributions are switching lights off, car-pooling, capturing rainwater to water one’s garden or carbon offsetting schemes.

The key is understanding what can be done and creating a culture of willingness and responsibility. Communication is key and the Internet makes this possible as never before.

To some extent this scenario is happening now, but there are clearly limits to how much it can achieve without some topdown initiatives (or economic imperatives) added to the mix.

Top-down Action and Technological Advances are Critical for Seizing Opportunities

The fact that all but one of the scenarios could conceivably address all the main energy issues points to much opportunity. Exploiting this rapidly enough is a major challenge. Another obvious challenge is highlighted by Scenario 4, which suggests that, at least in the developed world, ‘people power’ is not enough and top-down governmental action may well be necessary. Economic and practical pressures would achieve the necessary changes eventually, but it is probably not advisable to wait for the hurricane to prove that you should not have made your house of straw. As for opportunities, the scenarios explored highlight those best. Scenario 1, ‘Harvesting Energy’,
perhaps best illustrates the dramatic achievement that might be had given only certain technological advances. Many other scenarios are possible, of course, and those developed were deliberately positive. But the consensus at The Lab was that all the scenarios were credible, so they probably do represent real opportunities.

Diverse Solutions, Proactive  Government and Advances  in Technology Are Key

In view of policy implications, the full two days of discussion and debate might be briefly summarized in the following manner.1

Oil dependence is a danger that needs addressing

Despite much disagreement about how close ‘peak oil’ is, all seemed to agree that action is needed now to reduce the developed world’s dependence on oil.

Solutions to the problems being faced will be diverse

Different environments are likely to beg different solutions and the diversity of technological developments that bear on the issues prevent simple answers and argue for multiple alternatives to be investigated.

The variation across the scenarios developed suggests that multiple approaches will be needed in parallel, covering conservation, alternative forms of generation, and storage and transmission technologies. The best solution or combination of solutions for a given region will vary with external factors (climate, population density, access to water, etc.) and with developments in numerous interacting technologies. The appropriate focus can vary dramatically depending on the existing situation. For example, a focus on coal in the short-term is sensible for China, if the aim is energy independence, while France might see nuclear in a similar light. In lower latitudes, solar energy will be more quickly economically viable than in higher latitudes, where geothermal may be a better choice. In all cases, conservation makes sense as a priority and gives the most rapid return on investment.

Given this diversity and uncertainty, it seems sensible to recommend broad investment in energy-related R&D and a systematic, inclusive, and iterative analysis of the energy situation at regional scales.

It is worth noting that only two currently achievable sources of energy are sufficient for global needs in the long-term and truly sustainable. They are solar and geothermal energy.

In the developed world government action is probably essential

The ramifications of energy supply disruption and the time needed to change our infrastructure suggest that appropriate change cannot be expected to arise from market and social forces. Accordingly, governments need to be a key player in developed countries. Proactive action from government is almost certainly necessary to avoid the risk of severe economic disruption.

Much of the rest is down to technological developments and their impacts on the economic competitiveness of certain technologies. Though solar emerged from the Lab as the winner in terms of chief long-term global energy sources, the means of capturing it, transporting it and using it produced no clear favourites. The range of possibilities from domestic to industrial to automotive applications in a diverse range of environments suggests that all avenues of research should be actively explored. Since solutions will likely be more complex than the current rather monolithic systems, flexibility, interoperability and rapid adaptability are critical success factors.

In the under-developed world, small changes or actions may have a large and lasting positive effect

When tackling the issue of poverty on a global scale, there may be a possibility of achieving much with little (Scenario 1), given certain technological shifts.

The participating thought leaders were:

Humberto Schwab, director of the Club of Amsterdam and innovation philosopher, led the process.