This forward looking exercise suggests a new approach to better structure Bogota’s fruit, vegetable and tuber supply chain by reviewing and reinforcing certain strategies stated in the Food Supply and Security Master Plan (FSSMP) in order to promote actions by the public sector and the stakeholders involved in this supply chain.

Bogota’s fruit, vegetable and tuber supply chain involves multiple actors, business models and interests, which are not yet aligned and can hardly be coordinated without both public and private involvement. In 2003, the City of Bogotá commissioned the CPTCIPEC Consortium to conduct a diagnostic study of the food supply chain system and the nutrition of the city’s inhabitants. This study served as input to the Food Supply and Security Master Plan (FSSMP) in 2006. From a nutritional perspective, it identified significant gaps in the intake of some foods, in particular fruits and vegetables, compared to an ideal diet. Concerning the operation of the supply system, it suggested eliminating massive product loss along the supply chain to increase the offer of these foods and reduce the number of middlemen in food markets as a means of lowering prices and making the products more affordable to the general public.

The FSSMP suggested the creation of a new food supply system that facilitates direct exchange among producers and retailers. The new organisation would be bolstered by introducing a virtual trade platform for products, a regional network of food consolidation centres and five logistics platforms in Bogota whose main role would be to facilitate cross-docking operations rather than product storage. Therefore, the FSSMP suggested to undertake efforts to establish groups of producers (supply) and retailers (demand) and advance the design and construction (or implementation) of a logistics and e-commerce platform. Despite all efforts, it has been difficult to convince producers and retailers to shift from traditional supply chains to the new scheme proposed in the FSSMP.

New advances in logistics strategy and the first results of implementing the FSSMP show a lack of effectiveness of the strategies originally stated. Therefore, the current study reviewed the initial statements in the FSSMP based on a foresight approach. The foresight methodology used in this study consisted of five stages: pre-foresight, recruiting, generation, action and renewal (Miles, 2002; Popper, 2008b). First, the Master Plan served as input to define the objectives and scope of the exercise. Then, stakeholders and their relationships were identified. Later, system dynamics (SD) was used to model product, information and money flows along the fruit, vegetable and tuber supply chain.

As a result, two scenarios, for five products, are presented that discuss actions by the public sector and reactions to be expected throughout the whole food supply system. Finally, these outcomes are compared to the Master Plan’s objectives and some recommendations are made to improve its implementation. For this exercise, we consulted 247 market storekeepers, 15 experts in the production and trade of fresh products and urban logistics, 5 industry experts, personnel from the Corporación Colombia Internacional (CCI – the trade association of tomato, banana and plantain farmers), 5 managers from the Secretaria de Desarrollo Económico (SDDE) and researchers from MIT-CTL. More specifically, the stakeholders identified in the fruit, vegetable and tuber supply chain are represented in Figure 1:

The metrics of the SD model, such as flows, costs and prices, were defined from secondary sources such as regional and national studies, statistics, polls and governmental reports. Initially, the FSSMP included only material flows and nine scenarios that focused on identifying capacity problems in production, transport, distribution and inflows to Bogota. However, the new SD model developed in this study went further by including, to some extent, the flow of products, money and information of the five most important products (bananas, oranges, potatoes, plantains and tomatoes) in the fruit, vegetable and tuber supply chain.

The actors, represented in boxes, exchange food products. They will send – or ask for – a greater quantity of products through a certain channel depending on supply, demand, prices and costs (Figure 2). Every actor’s purchase and sales prices are determined by adding the previous actor’s costs per unit sold, fixed costs, variable costs, waste costs and expected monthly profit. 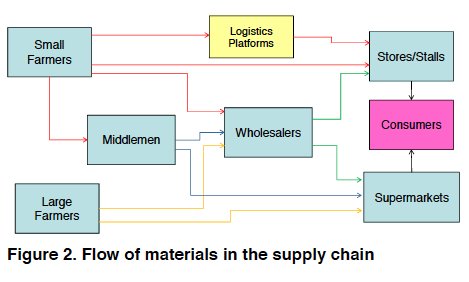 The cash flows represented are costs of transportation, costs of distribution, costs of selection and prices. In addition, delays are depicted as money flows from purchases of middlemen, stores, wholesalers and supermarkets, which are paid in cash (Figure 3). Half of the money from wholesalers’ purchases is given at the moment of product delivery while the remaining half is due one month later. Supermarkets apply a 90-days payment policy to their suppliers, which means that total payment is completed three months after receiving the product. 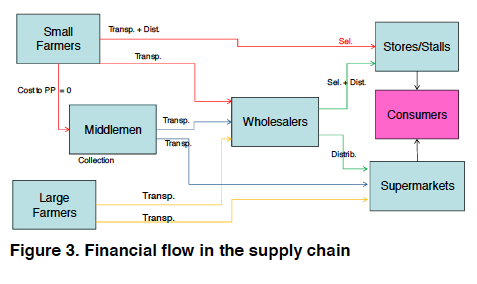 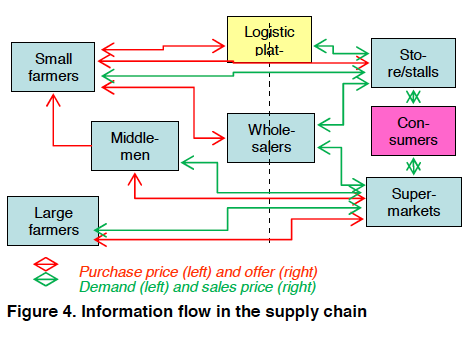 Scenarios of Producers’ and Storekeepers’ Associations

After identifying these three flows that affect the supply chain under study and including them in the new SD model, eleven new scenarios were defined, but only four were elaborated in the SD model. However, in this work we present only two scenarios for the top five products in order to show the impact of storekeepers’ and producers’ associations. A set of variables in the SD model (tables 1 and 2) was grouped in the following categories: flow changes in distribution channels and variations in product volume, profits and prices. Thus, the model was run to observe the behaviour of these variables for the five selected products.

The first scenario measured the impact of producers’ associations on the supply system (Table 1). It revealed a reduction of transportation costs due to better use of transportation capacity, a wider distribution of products’ consolidation costs since they are divided among all producers and an increase in productivity because producers’ orders are centralised. The producers’ association scenario presents favourable results for the various variables along the supply chain for bananas, oranges and potatoes. However, the variables for plantains and tomatoes show no changes, which is explained by the fact that producers of these products generate enough profits to organise transportation to forward actors in the chain on their own. 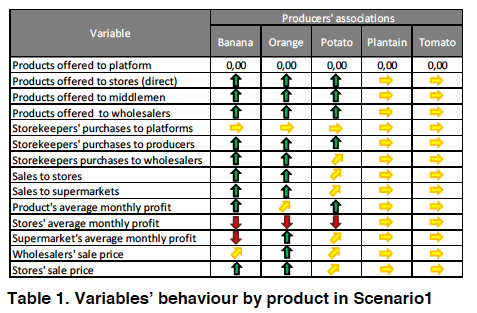 The second scenario measured the impact of storekeepers’ associations on the supply chain (Table 2). In this scenario, there are cost reductions in the selection and distribution of products and reductions in sales prices across all five products sold by storekeepers to customers. The main obstacle to achieving an association of storekeepers is the creation of a scheme for stores that allows an agent to delegate the process of sorting fruits and vegetables to the storekeepers selling the products to the final consumers. 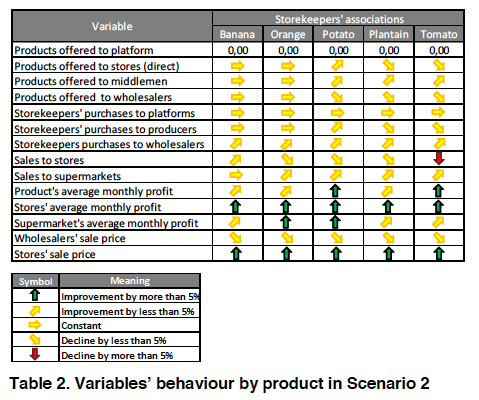 This forward looking exercise allowed the SSDE to better understand and implement the FSSMP. The two main scenarios depicted here as well as the SD model for the five products show, to some extent, the relationship between the actors, their interaction, and the structure and performance of Bogotá’s food supply system. The limitations of the model suggest that the food supply in Bogota cannot be studied without considering demand in the rest of the country or the economic feasibility of production. The following conclusions were drawn from the outcomes of this exercise:

1) The priority for products such as bananas and plantains should be to increase production to supply the city instead of reducing prices. The models reveal that the production of these two foods is quite low compared to demand. Nevertheless, food supply of the city should not be considered isolated from demand in the rest of the country.

2) Middlemen and wholesalers do produce value especially in case of products and trade channels with low trade volumes. The study showed that direct supply from producers to stores is more expensive than when other actors are involved. Higher costs arise because of the additional work involved in selecting the products required to replenish the stores. A detailed analysis showed that the cost gap between direct channels and other channels results from the selection costs incurred by stores when
buying directly from producers and from the size of the purchase order to be managed by the seller in-house.

3) Prices tend to even out between different channels. A balance of prices sets in because producers, looking for higher profits, will attempt to supply the channel that represents the highest profit, increasing the products offered through the respective channel. As a result, we can expect this not only to encourage a reduction in prices in this channel but also to reduce or increase existing shortages of products and costs in the other channels accordingly.

In order to reinforce the strategies and recommendations stated in the initial FSSMP and respond to the reality of food supply in Bogota, it is highly recommended

1) to acknowledge the diversity of stakeholders along the supply chain and develop operational or contractual schemes that allow to align efforts and deal with risks;

2) to tackle problems in the fruits and vegetables supply chain by individual product since each product responds to different dynamics of supply and demand;

3) to further develop and improve the SD model as a tool to collect and analyse information regarding the food supply system and further pursue the different research initiatives to accomplish the objectives stated in the Food Supply and Security Master Plan (FSSMP).

Miles, I. (2002): Appraisal of Alternative Methods and Procedures for Producing Regional Foresight.