An integrated quantitative scenario analysis was conducted to elaborate, describe and evaluate strategies and paths for the European Union to achieve significant reductions in domestic greenhouse gas emissions by 2020. The objective of the foresight exercise was to support EU wide consensus formation, to assist in priority-setting, and to help raise awareness with regard to policy, industry or society as a whole.

How to Reach EU Targets on Green House Gas Emissions?

The EU has committed itself to limiting global warming to a maximum of 2°C average temperature increase above preindustrial temperatures (Council 2005). According to most recent research, keeping within this threshold requires that global green house gas (GHG) emissions be cut approximately in half by 2050 (Hare & Meinshausen 2004). In fact, global emissions will have to peak and decline in the next one to two decades for temperatures to stay below the 2°C threshold. This consequently indicates that industrialized countries will have to reduce their GHG emissions by approximately 60-80% by 2050 in order to leave room for legitimate economic growth and ensuing higher emissions in developing countries (European Commission 2004). In addition, some developing countries will also need to commit to taking steps toward a less carbon intensive development strategy. To achieve this challenging goal, rapid action is needed. Future commitment periods under the Kyoto Protocol with a likely time horizon of 2013 to 2017 and 2018 to 2022 will thus need to see substantial reduction targets by developed countries. This will be a precursor of further action and commitments on part of developing countries. In January 2005, the European Parliament emphasized “the necessity of significantly enhanced reduction efforts by all developed countries in the medium term to be able to meet the long-term emission reduction challenge”, which it quantified for industrial countries “of the order of 30% by 2020” and “of 60-80% by 2050”. It also called on the EU “to adopt reduction targets at the 2005 Spring European Council which are in line” with these objectives (European Parliament 2005). The European Commission in its communication ”Winning the Battle Against Global Climate Change” supported the necessity to limit temperature increases to a maximum of 2°C worldwide compared with pre-industrial levels and confirmed its will to take international leadership towards combating climate change (European Commission 2005). It also documented the relatively low economic costs to do so without even calculating the expected benefits from emissions reductions. Against this background, WWF commissioned the Wuppertal Institute to conduct an integrated scenario analysis of GHG emission reduction potentials of the EU 25 for the year 2020. For this purpose, the Wuppertal Institute developed a strategy scenario called the “policies and measures (P&M) scenario”.

This scenario relies on a baseline derived from the energy and transport projections for Europe (Mantzos et al. 2003). Its strategies and assumptions are based on evaluation and extrapolation of detailed analyses in all sectors, for many countries, and for important energy-using goods and appliances. The most relevant studies were selected for this purpose.

An integrated scenario analysis of the EU 25 was carried out in order to determine whether and how a reduction of GHG emissions in the order of about 30% below 1990 levels by 2020 could be achieved. The analysis consisted of two scenarios:

The Business-as-usual (BAU) scenario assumed policies with no special emphasis on climate protection and energy issues, neither with regard to additional policies since 2003 specifically designed to meet the Kyoto Protocol targets nor to rising energy prices and increasing concern about limited resources. The BAU scenario is mainly based on the data and assumptions made in the most recent energy projections for Europe (Mantzos et al. 2003).

In the P&M scenario, existing cost-effective potential for increasing energy efficiency is exploited and ambitious targets for market penetration of renewable energies are actively pursued. In addition, a switch to less carbon-intensive fossil fuels, such as natural gas, and effective policies and measures to mitigate the exploding demand in the transport sector are assumed under the P&M scenario. The P&M scenario includes a moratorium on new nuclear power plants and compliance with the nuclear phase-out schemes in the respective countries concerned.

Quantification and combination of potential, strategies, policies and measures, and the calculation of scenarios were conducted using the Wuppertal scenario modelling approach.

The Business as Usual Scenario

Although the BAU includes considerable energy-efficiency improvements in all energy-consuming sectors, increasing renewable energy shares and a decoupling of gross energy consumption growth (+0.7% p.a.) from GDP growth (+2.4% p.a.), no reduction of GHG emissions from energy use can be achieved by 2020 under BAU conditions. On the contrary, CO2 emissions from fuel combustion are expected to increase by 10% compared to 2000 levels.

These results highlight the fact that with the existing EU climate policies the Kyoto targets for the first commitment period (ranging from 2008 to 2012), which aim at a reducing emissions of six gases by 8 % compared to 1990 for the EU 15 and slightly lower reductions for the new member states, will not be met even if further greenhouse gas emission reductions in other sectors and gases are taken into account. Tougher long-term targets for the following periods up to 2020, which are crucial for mitigating climate change, seem to be even more out of reach with BAU policies.

To explore how the BAU development could be redirected toward a more sustainable course, a sectorally disaggregated high efficiency scenario was developed for the EU 25. The P&M scenario includes policies and measures specifically geared toward enhancing emissions reductions. Supplementary to the high efficiency strategy, a renewable strategy is outlined which is based on the medium-term potential for renewable energy within the EC (European Commission 2004) and can be expected to produce substantial additional emissions reductions.

The P&M scenario describes an ambitious energy efficiency strategy, which covers all demand sectors and is projected to lead to final energy savings of about 22% versus BAU by 2020. This would mean stabilising final energy demand at about current levels. 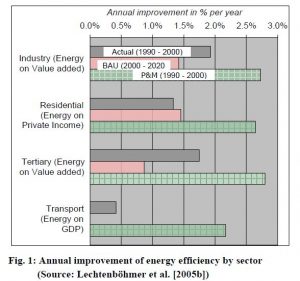 These two effects – stabilising energy consumption through energy efficiency at all levels and maintaining domestic production by increased production of renewable energies – will not only allow to reduce domestic GHG emissions by more than 30% but at the same time will enable to bring the trend toward increasing import dependency to a halt. Domestic energy production would be able to deliver about half of European energy consumption. 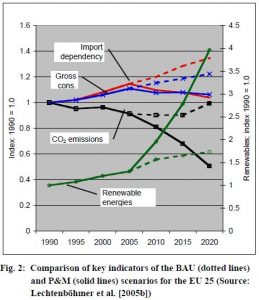 This means that economic and ecological risk minimization can be achieved. As compared to BAU, the P&M scenario will reduce risks and potential costs of climate change as far as possible as well as other environmental damages incurred as external costs of energy supply.

In order to change the course from BAU trends, which lead to increased energy demand, greater dependency on foreign resources, and accumulating risks, towards a sustainable energy strategy, a comprehensive policy package is needed.

Combining the EU emission trading system with a comprehensive set of sector- and technology-specific policies and measures for energy end-use and supply efficiency, such as combined heat and power (CHP), and electricity generation from renewable energies has to play a leading role, as the emission trading scheme covers sectors that are expected to account for about 60 % of total emission reductions in our P&M scenario. Consequently, national caps have to be set to ensure an overall 2.8 % per year decrease in emissions. Strong policies and measures for transport, for energy efficiency, in support of thermal uses of renewable energies, CHP heating and housing renovation.

The study concludes that an integrated and active climate protection strategy for the EU is not only necessary in order to mitigate impending global climate change but is also feasible, as such a strategy would spur the EU economy to accelerate improvement of energy efficiency and to adapt power systems to renewable energy supply. Furthermore, it represents an approach suited for minimizing risks, not only of global warming but also of disruptions in energy supply and of increasing energy prices.

The study, published in summer 2005, was probably the first to draw a complete, though rough, scenario for the EU 25 in line with the target indicated by the European Parliament: a domestic reduction of GHG emissions by more than 30 % by 2020. In the P&M scenario, the study briefly sketched the general feasibility, the sectoral distribution, as well as the technology and the policy requirements for achieving more than 20% final energy savings versus BAU and expanding renewable energies to deliver more than 20% of EU primary energy supply.

In so doing, the study already anticipated the key targets of the “triple 20” climate policy package adopted by the EU Spring Council in 2007. Moreover, it also gives evidence for the fact that energy savings of 20% compared to BAU and a share of 20% renewable energies have the potential to reduce EU 25 GHG emissions by about 30%, which is substantially more than the 20% the EU has so far decided upon.

European Commission (2005): Winning the Battle Against Global Climate Change. Communication from the Commission to the Council, the European Parliament etc. Brussels.

Hare, B. & Meinshausen, M. (2004): How much warming are we committed to and how much can be avoided?, submitted to EU’s stakeholder consultation on Action on Climate Change Post 2012.