Globalisation has become a keyword of the 21st century. Who are the winners and who are the losers in a globalised world? The term globalisation triggers extremely contradictory emotions among the people of Europe. One third of Europeans (33%) regard themselves as winners of this development and see globalisation as a kind of liberation from overly constrictive and outdated boundaries. In contrast, one in five citizens feels to have lost out in this process (21%). Europeans only agree on one issue: the process of globalisation can neither be halted nor reversed. These are the results of the first European representative study that asked 11,000 citizens aged 14 and above in Belgium, Finland, France, Germany, Great Britain, Hungary, Italy, Russia and Switzerland about their hopes and fears for the future. The study was part of a research project by the Stiftung für Zukunftsfragen (Foundation for Research on the Future) of British American Tobacco.

The effects of globalisation were subject to extremely different interpretations in the individual European countries: over half of the Finns questioned (51%) see themselves as winners. The Belgians (43%), Swiss (43%) and British (39%) take a similarly positive view of the future. Equally for the French (37%), Italians (25%) and Russians (24%), the hope of being able to profit from globalisation is greater than any fears they have. The Hungarians and Germans, however, are of a less positive mindset. In both countries, less than one in five (19%) believes that globalisation would have positive effects on their future. In these two countries, globalisation is evidently not the problem, but rather the degree of inequality and the subjectively perceived unjust distribution of the benefits of globalisation
between the winners and losers. Citizens doubt whether this distribution is socially just and fair.

A representative face-to-face approach was used for this study. The interviewees were given a list of possible answers, which were presented in a random order. A total of 11,000 people aged 14 and above were questioned in nine countries. A sample of either 1,000 or 2,000 people was surveyed in each country. The study was conducted in Belgium, Finland, France, Germany, Great Britain, Hungary, Italy, Russia and Switzerland between 14 September and 26 October 2007. The underlying definition of Europe was not based on membership in the European Community but on geographical criteria. The countries were selected to ensure that nations from all European
regions were included in the sample. The European study was a research project of the German BAT Stiftung für Zukunftsfragen. An external market research institute GfK (Gesellschaft für Konsumforschung) and its partners in the various countries conducted the study.

What is the Stiftung für Zukunftsfragen?

The BAT Stiftung für Zukunftsfragen, a German foundation for examining societal expectations, promoting the scientific debate on issues determining our future and furthering approaches to a sustainable resolution of social issues of the future. Futurologists at this foundation have been examining societal expectations since 1979. The foundation acts as an independent interface between science, economics, media and politics. For many important opinion leaders, the foundation’s future research has provided support for political and social decision-making processes for decades.

According to the study, the most enduring and sustainable future safeguard for all Europeans is, without a doubt, quality of life. First and foremost, quality of life means one’s health (95%), family (90%) and friends (88%) – partnership (78%), nature, education and work (76% each) are rated slightly lower. Spending money and having leisure time (65% each) are regarded as important by two thirds of those questioned. Religion is mentioned by only one third of the people asked (30%) as a factor significant to personal well-being with even sports ranking higher (39%).

In this new Europe-wide study, major differences within the countries surveyed can be identified:

Europeans do not necessarily wish to improve their standard of living but rather their quality of life. Answers to the question “What are we living for?” are called for. There was agreement amongst those questioned that one’s own health is “the” prerequisite for quality of life. This is followed by family and friends in almost all countries. Alongside health, social areas are coming to the fore. On the other hand, the importance of aspects which were formerly central to quality of life, such as work, consumption and leisure time, is declining.

Crime, Aggressiveness, Lack of Honesty: Europeans’ Fears for the Future

Crime is Europe’s unsolved problem. Two thirds (66%) of those questioned from Helsinki to Rome, Moscow to Zurich and Berlin to London state that fear for their own safety was – by far – their greatest worry for the future. The majority of concerns are focused on interpersonal dealings associated with a feared loss of prosperity. Aside from fear of crime, increasing levels of aggressiveness (51%), decreasing honesty (41%), selfishness (38%) and intolerance (37%) are all causes for concern. The consequences could be loneliness (29%) or social exclusion (27%), which almost inevitably result in social conflict. The entire network that unites, keeps together and protects society is in question.

The citizens of the various countries express different fears:

Social cohesion as a society’s central resource is threatened. It is being replaced by an aggregation of individuals whose behaviour is determined by short-term cost-benefit calculations and guided by the question: “How can I benefit?” Every single society requires a minimum of solidarity and feeling of community. This, however, requires that people are united and feel responsible for one another. Just as the desire for a sense of community, solidarity and security grows, it becomes increasingly difficult to satisfy these wishes. This presents a challenge to every single one of us. Politics is only in a position to provide the framework, whereas people are responsible for implementation.

Europeans are just as aware of their fears as they are of potential solutions. There are signs of a positive change in values: the focus is shifting towards pro-society values, aimed at ensuring harmonious cohabitation. These values include friendship (65%), social justice (60%) and reliability (59%). There is also agreement amongst the majority of people asked about the following values: love (58%), helpfulness (55%), freedom (53%) and friendliness (50%). In response to the question which values are particularly important to the person questioned, the following rate slightly lower: loyalty (48%), conscientiousness and social responsibility (46% each).

Comparing the answers given in the various countries, it becomes clear that there are different needs and requirements. For example, helpfulness, conscientiousness and reliability are at their loudest in Germany. In comparison, in Great Britain friendliness, loyalty and social responsibility are demanded first and foremost. The Swiss wish for love and responsibility, whilst the Finns demand freedom and social justice. Europeans want to see a quick end to looming social erosion. They are willing to undergo moral renewal. Research in the nine
European countries has shown that there are signs of a renaissance of faith in the future. The citizens of Europe are becoming increasingly confident. The age of egoism is slowly coming to an end. And reliability can once again begin to take hold where arbitrariness once flourished. 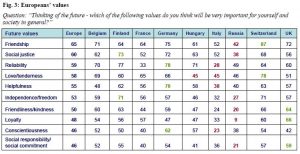 First Approach for the

The results of the study will be interpreted in detail and published in March as a hardcopy (about 80 pages, German and English). This publication will be sent to members of the German and the European parliament who deal with issues affecting the future of Europe. Press releases will be sent out in all nine participating countries. The study is a first approach at addressing one of the main projects of the foundation in 2008 called The Future of Europe. Members of the EFMN Network who are interested in the publication can contact the foundation by email and we will send a copy of the study (a PDF file) in the 2nd half of March 2008.