In 2006, the City of Vienna initiated a far-reaching, open strategy process on the orientation of its future research, technology and innovation (RTI) policy. The aim was to develop, in a participatory process, a comprehensive strategic framework and concrete proposals for municipal RTI policy actions until the year 2015. By then, Vienna is aiming to be among Europe’s leading metropolitan areas in research, technology and innovation, as the hub of a network of research locations in the Central European Region (CENTROPE). The objectives, challenges and fields for action to be tackled in order to reach this position were translated into a set of concrete measures, some of which are to be started in 2008.

Vienna as a Centre of Science and Research in Central Europe

Vienna is the key centre for science and research in Austria as well as in the wider central European area to which it belongs. With its “twin capital” Bratislava being only 60 km away, it occupies a unique position in Central Europe. As mirrored in international benchmarks, the Austrian innovation system has gone through a phase of fast growth of R&D expenditures and internationalisation. Austria is increasingly recognised as one of the leading European countries in research. Austria has accomplished major structural reforms, affecting universities as well as research funding bodies, many of which are located in Vienna. Simultanously, several Austrian regions have initiated or reinforced their RTI policies. Vienna already launched an active RTI policy in the early nineties and was now confronted with the necessity to revisit the institutional and RTI policy landscape.

At the same time, new challenges were identified that would have to be tackled in order to keep pace with the international developments in science, technology and innovation, with new employment patterns and with the need to further upgrade research and innovation performance. In 2006, it was therefore decided to initiate a process of strategic debate, bringing the growing number of diverse actors together in an open and selfcritical debate.

Systems Research in the Urban Area: Groundwork for RTI Policy

The strategy process was built on solid ground. In addition to a number of specific studies, it drew on the results of the largescale research programme “Systems Research in the Urban Area” that provided the analytical groundwork and took first exploratory steps towards identifying future challenges to the RTI policy of the City of Vienna. The results of the programme later on served to fuel the debates in the different expert panels in the strategy process phase. The goal of this comprehensive research programme was to identify scientifically founded observations and analyses to underpin the development of an integrated, future-oriented urban research and innovation policy.
Initiatives in this urban policy area were expected to contribute to enhancing the competitiveness of firms in the city, thus fostering the socio-economic development of the Vienna metropolitan area by giving those impulses a regional government can specifically provide. Central to the research programme was the combination of different perspectives on the current situation of the urban innovation system.

The preliminary results from the various analyses from different perspectives were brought together during a forwardlooking integration phase in spring 2006, i.e. before the start of the actual strategy process. In this phase, four scenarios were developed, which served as a backdrop for later elaborating elements of an RTI policy strategy for the city of Vienna. The essence of these four scenarios is captured in their titles:

Following this preparatory phase, which was initially not even intended to lead to a participatory strategy process, the main phase of the project “Wien denkt Zukunft” started in November 2006 with a major kick-off event attended by over 500 participants. The title “Wien denkt Zukunft” is actually a wordplay, which is not fully captured by the English translation “Vienna Looks to the Future – knowledge means change“. Over the following twelve
months, a broad participative debate on RTI policy strategies for the city was conducted. Many players coming from various units of the municipality, from universities and other research institutions,
from the education sector, and from (high-tech) business contributed to the process. The discussion was intended to develop a comprehensive strategy and vision for municipal RTI policies by both identifying areas for action and implementing adequate policy measures until the year 2015. The figure below shows the course of the described process: 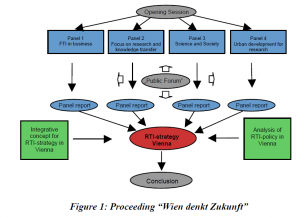 Inspired by the preparatory research, four core themes were identified on which experts panels focused their work (see Figure 1):

The process started with a kick-off event (opening session) at City Hall with prominent proponents from politics, academia and business and several hundred participants. After the opening session, the panels established themselves and each panel met between three and five times over the following months. In addition, regular inter-panel meetings and meetings with the supporters were held throughout the whole period. A website served to document the discussion and also offered the public an opportunity to contribute to the process with own ideas and proposals throughout the whole period. The participatory nature of the strategic process is demonstrated by involving more then 100 players from various areas in the panelwork. Additionally, major public events were organized at the beginning, half-way through and at the end of the process in order to gather further input from a broad range of stakeholders, complemented by interactive tools made available on the accompanying website (www.wiendenktzukunft.at).

A cross-panel analysis revealed five main challenges that would need to be tackled over the coming six to ten years:

Within its jurisdiction, the City of Vienna can provide stimuli for achieving the identified goals. Options for translating these goals into specific measures can be conceived along the lines of the main determinants of innovation ranging from push factors in the area of science (e.g. R&D subsidies, selective subsidies complementary to national subsidies), through acceleration of the transfer process (selective measures such as licensing initiatives, venture capital), to pull factors in the area of socio-economic demand or application potential on the demand side. 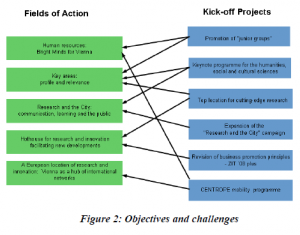 Bearing in mind this broad spectrum of options, the RTI process “Wien denkt Zukunft” identified five key fields for action on which the City of Vienna will concentrate its RTI policy in the next years:

Based on the objectives, challenges and measures identified during the strategic process “Wien denkt Zukunft”, several concrete proposals for new projects or initiatives were developed in the five fields of action. Six of these projects have been prioritised (“kick-off projects”) and are likely to be implemented in the coming two to three years (see Figure 2). For the year 2008, the initial three projects have been endowed with approximately 14 million euros.

More Information is available at :

An English summary is available at:

For information concerning “Systems Research in the Urban