Empowering the strategic development of Europe’s regions is a critical requirement for transforming the EU into a competitive knowledge-based economy. To this end, regional decision-makers need to be enabled to design and implement better RTDI policies, and also to benefit from a better coordination of regional, national and EU policies. By developing and testing a new model of transregional foresight, the ForTransRIS project supports this aim. It thus contributes to the improvement of regional innovation strategies (RIS) through a transregional perspective. The transregional foresight model to upgrade RIS is tested in the five partner regions taking the issue of transregional knowledge and technology transfer as a concrete case.

The Role of Regions in Increasing EU Competitiveness

The systematic regional application of foresight and related approaches both in the public and the private sector is increasing in importance because the regions have a vital role to play
in the EU’s drive to develop a common European Research Area (ERA). EU goals include achieving the 3% of GDP target for investment in research, technological development and
innovation (RTDI) set by the European Council (Barcelona 2002) and the optimisation of research programmes and priorities envisaged by the Commission (Green Paper on New Perspectives
for the ERA, 2007). In this context, empowering the strategic development of Europe’s regions is a critical requirement for transforming the EU into a competitive knowledge-based economy.

Foresight exercises appropriately adapted to distinct regional conditions and capabilities can effectively aid decision-makers in designing and implementing better RTDI policies and investment
strategies. They support regional authorities in continuously reviewing and developing the institutional features, strategic capacities, and the organisational skills and expertise
to design and implement research and innovation policies that can increase the regions’ competitiveness. This is important not only for the regions’ own economic well-being but also
because of the cohesion ‘risk’ it could pose for the European Community if some regions remain marginal in terms of knowledge-based activities. An additional contribution to a more competitive EU is achieved when the strategies in the different regions are developed in a way that leads to an overall optimisation of programmes and priorities in the EU, at and across governance levels.

A comprehensive uptake and application of foresight and related tools (such as technology assessment, evaluation, benchmarking etc.) is needed so that decision-makers can master the mounting pressures to deliver tailored and futureoriented RTDI policies. The advances made in this respect have encouraged policy-makers in some territories to use the tools more systematically to produce customised intelligence and know-how, thereby facilitating innovation and learning processes in their economic systems and societies. In so doing, they benefited from

The strength of a foresight approach to RTDI policy-making stems from bringing together specialised technical expertise (both technology expertise and foresight process know-how), diverse, distributed local know-how and broad participation of stakeholders. The complexity of the policy challenges requires technological expertise; local knowledge and broad stakeholder participation serve to feed and anchor expert deliberation and ensure the relevance of such expertise to the outcomes and the implementation of the foresight exercise; the process know-how ensures that successful strategies are formed as a result of the comprehensive collaboration of all these different resources.

The project aimed to raise awareness among decision-makers in Europe’s regions and encourage them to benefit from the knowledge and experience that can be gained by applying foresight in their own regions. Participants were regional policy makers and development agencies from Navarra (Spain), StuttThe policy-makers thus need to move from the traditional topdown, reactive approach to one that is proactive, participative, evidence-based and uses transparent methods in finding solutions to the modern policy challenges. The new approach embraces foresight and related tools not only to gain access to difficult-to-acquire strategic information for decision-making but also as socio-economic mobilisation tools to raise awareness and create consensus around promising solutions.

The strategic know-how generated in this way is crucial at two levels:

Successfully linking strategic knowledge on both levels will lead to better economic decisions, which in turn lead to increased and sustained business and regional competitiveness. This challenge necessitates the tailored application of foresight exercises on all decision-making levels, from European, national to (trans-)regional, cluster and individual company levels.

The FP6-funded project ForTransRIS, which ran from January 2007 to December 2008, concretely tackles the aspects outlined above and especially deals with improving regional foresight exercises through transregional cooperation. The project aimed to raise awareness among decision-makers in Europe’s regions and encourage them to benefit from the knowledge and experience that can be gained by applying foresight in their own regions. Participants were regional policy makers and development agencies from Navarra (Spain), Stuttgart(Germany), Brittany (France), Stockholm (Sweden) and Liguria (Italy), supported by foresight expert partners in each region.
The ForTransRIS project developed and tested an approach to improve regional decision-making by applying regional foresight in a transregional perspective (see graph below). The transregional foresight exercise was developed building on the experiences and needs of the participating regions and aiming to enhance the individual regional innovation strategies as well as the general ability to apply foresight for regional RTDI decision-making by way of this cooperation.
As a first step, the overall approach on how to conduct individual foresight exercises on the regional level and then further elaborate and transfer the results to a joint transregional level was developed. It was decided to test the approach by applying it to the field of knowledge and technology transfer and its ability to enhance regional innovation and competitiveness. Approaching this issue from the regional and transregional dimension was expected to be especially useful because of the high innovation benefits that all actors can gain by cooperating within and across regions. In the ForTransRIS project, transregional knowledge and technology transfer (TKT) was defined as “the process through which the scientific and technical knowledge (either tacit or codified), generated in one organization (source), is exploited economically by a firm by means of a complex interaction and cooperation between the source and the firm and, usually, other players.” 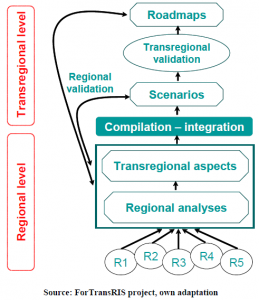 Once the structure of the exercise had been set up, an analysis of the five regional innovation systems was carried out by the regional partners. They conducted desk research and interviews with all relevant regional innovation systems actors by using a structured questionnaire to identify the innovation needs, barriers and future aspirations as seen by the stakeholders. In addition, opportunities and challenges for knowledge and technology transfer within and among regions were identified, which (can) result from and facilitate transregional cooperation. In a next step, the foresight experts synthesised and compiled the regional analyses into a smaller number of drivers to find out which issues are most relevant for each region and at the same time most promising to be dealt with on a transregional level.

The regional actors then evaluated the drivers during a workshop according to their future relevance and probability of occurrence. Then, each region developed a vision based on these drivers about how knowledge transfer should look like in the region in the future. Based on these visions, the evaluation results and the input from the regional analyses, the most relevant aspects for developing transregional scenarios were identified. The most relevant aspects the scenarios built upon are

– a fragmented vs. integrated governance system;
– the degree of propensity to business risk and innovation
among the regional innovation stakeholders.

By combining these opposite situations for the two aspects, four scenarios give different pictures of what the future could look like depending on the development of the drivers. In order to facilitate the analysis, only two scenarios were elaborated in more detail: the ‘stormy’ scenario, which can be
seen as the extrapolation of today’s situation based on the enhancement of its negative features; and the ‘sunny’ scenario, which can be seen as the most favourable framework for TKT (optimal scenario). The other possible scenarios, ‘rainy’ and ‘cloudy’, describe intermediate situations. They might be a transient state in the evolutionary process from ‘stormy’ to ‘sunny’, or, realistically, the
most likely situations when systematic strategic cooperation between the different regional actors fails to be established. The main issues affecting TKT considered in the scenarios are the following:

The scenarios display what knowledge and technology transfer within and among the regions could look like and how it might be facilitated by transregional activities in the future. They can be used to raise awareness among regional stakeholders concerning which future state they deem preferable and discuss what can be done to achieve it. In ForTransRIS, this was done during scenario validation
workshops in each partner region. There, it was discussed if the scenarios were indeed feasible for the region and which issues were most relevant. The most relevant issues from each region were then matched to find out which issues were most relevant for all regions.

The three issues identified were:

During a transregional panel workshop attended by stakeholders from all partner regions and complemented by external experts and stakeholders from other regions, these issues were discussed and further elaborated (main characteristics, possible transregional actions, …) as a basis for the roadmap development to follow. The foresight experts in the project then used the scenarios,
the input from the regional scenario validation workshops and the outcome from the transregional workshop to develop a roadmap for each of the three issues. The roadmaps display how each region can improve its innovation system by drawing on the knowledge of other regions and by cooperating on knowledge and technology transfer issues. This aims to guide the regions towards the implementation of joint actions in these fields. In parallel to the implementation of the transregional foresight exercise, the lessons learned during ForTransRIS and the approach used were synthesised in the ForTransRIS Methodology Guide to enable other regions to benefit from the experiences
made during the project.

The experiences made and the know-how gathered during the ForTransRIS project shows how regional decision-makers can make their regional innovation systems and policies more viable and competitive by applying strategic know-how more frequently and consistently, for example generated by transregional foresight activities. This is especially important in the
increasing global competition for infrastructure, enterprises and highly qualified human resources. Using a tailored set-up for transregional activities enables the participating actors to take stock of the comprehensive knowledge available in other regions, to raise awareness and mobilise all relevant regional stakeholders, to identify the most relevant issues for their concrete regional needs, and thus tailor regional policies and programmes for the benefit of longterm competitiveness and innovativeness of the region. Accordingly, the ForTransRIS approach ensured that the transregional foresight exercise was adapted to the regional needs and expectations and that, in turn, future regional foresight activities can benefit from the transregional experiences as well as the other region’s expertise. Thus, by applying foresight systematically to shape regional policies regional decision-makers will contribute to both the
successful development of their own region and to fostering the coherence and success of European programmes, priorities and policies.