DG Research’s Directorate for Science, Economy and Society in collaboration with the Bureau of European Policy Advisers launched a foresight exercise on “The World in 2025”, which resulted in a report published in January 2009.

The report “The World in 2025” highlights the main trends up to 2025 (demography, urbanisation, macro-economic projections, education, science and culture) and underlines the pressures on natural resources and the new production-consumption patterns while attempting to identify the so-called “wild cards”. The role for European foresight and forward-looking activities are presented focussing on a multi-polar world and beyond technological innovation. The report has benefited from the discussions of the group of experts set up by the European Commission in 2008 (see box below).

It has taken stock of the most recent publications in the field of foresight and forward-looking activities and includes most of the reflections of different Commission Directorates-General.

DG Research’s Directorate for Science, Economy and Society in collaboration with the Bureau of European Policy Advisers (BEPA) launched a foresight expert group on “The World in 2025”, which met on five occasions in 2008 and 2009.

The objectives of this group were, first, to assess and measure global trends over recent decades to serve as a basis for forward projections while distinguishing the different major economies and regions, including the European Union, and identifying the main economic, geopolitical, environmental and societal relationships and interconnections.

Secondly, the group was asked to generate and analyse alternative (even disruptive) scenarios of world trends up to 2025 based on specified assumptions about economic, political, social, environmental and technological developments in order to assess their consequences for the EU and to examine which policy responses could be appropriate. 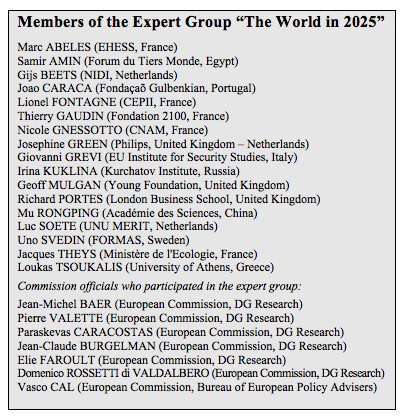 “The World in 2025” group was composed of experts with a profound understanding of global challenges and developments as well as a solid knowledge of foresight in specific countries or regions. Group members included representatives from think tanks, universities, industry, the European Commission and governmental bodies. Meeting five times in 2008 and 2009, the group produced two publications: one collects the experts’ individual contributions and the other called ‘The World in 2025 – Rising Asia and Socio-ecological Transition’ highlights the conclusions.

The experts identified principal trends, tensions and transitions while highlighting strategies that may help policy stakeholders make informed decisions. They also say that competition for natural resources and shifts in wealth, industrial production and populations may lead to tensions over natural resources (food, energy, water and minerals), migration and urbanisation.

Each expert produced an individual contribution to the discussions and, collectively, they generated a set of indicative scenarios for the world in 2025. The experts covered a wide range of issues, including demography, migration, urbanisation, cohesion, macro-economics and trade, employment, services, environment and climate change, energy, access to resources, education, research, technology, innovation, economic governance, defence, security and intercultural dialogue.

The key messages concern the main challenges to be faced in the next fifteen years, the main drivers that could impact on the future, the main strengths and weaknesses of Europe by 2025 and finally the wild cards that may radically change the different situations that are foreseen.

The report “The World in 2025” underlines the major future trends: geopolitical transformations in terms of population, economic development, international trade and poverty. It elucidates the tensions – natural resources (food, energy, water and minerals), migration and urbanisation – and draws transitional pathways towards a new production and consumption model, new rural-urban dynamics and a new gender and intergenerational balance.

By the year 2025, the centres of gravity, wealth and industrial production may shift towards Asia, and the United States and Europe could likewise lose their scientific and technological edge over Asia. India and China could account for approximately 20% of the world’s research and development (R&D), that is more than double their current share. 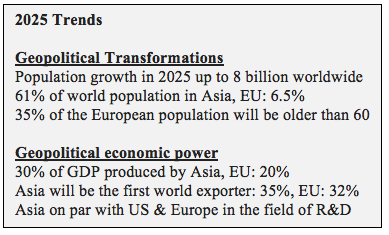 From these demographic and resource challenges, the report sees a new ‘socio-ecological’ production and consumption model arising. New technologies (renewable energy sources, capture and storage of CO2, nuclear power, hydrogen and fuel cells) as well as changes in social behaviour, supported by economic incentives, will contribute to a reduction in energy consumption (better house insulation, replacement of environmentally damaging cars with greener options, and increased use of public transport).

The report says that while numerous scientific and technological advances will give rise to controversies in society, Europe, with its wealth of various debate and participative governance experiences, is well equipped to manage them and involve civil society in research. Global access to knowledge, though, together with the development of joint global standards and the rapid worldwide diffusion of new technologies will have a great impact on Europe’s future welfare.

It is assumed that by 2025 Europe will be specialized in exporting high-tech products. Although the specific products are currently still unknown, they can be expected to benefit from the rapid growth in Asia whose growth will probably be accompanied by an increasing inequality in the purchasing power of the population. “The increase of the population is already a good indication of the future opportunities of the market, of the consumer aspirations that have not been covered, better than the Gross Domestic Product (GDP).”

The report also points to the possibility of future social conflicts emerging in Europe around scientific and technological advancements in areas like cognitive sciences, nanotechnology, security technologies, genetic manipulation, synthetic biology and others.

Among the unforeseeable turbulences that could shape the next two decades, the report identifies seven “wild cards”:

The EU should struggle for maintaining its leadership in key RTD areas, such as technologies of energy saving, research into sustainable development and climate change, health and the containment of diseases, food safety and security in general.

Europe Must Not Fall Behind in R&D

Experts suggest that Europe become a model based on emphasizing quality of life, which might involve maintaining global access to knowledge and guaranteeing or contributing to establishing international standards in science and technology. “To ensure access to knowledge through the global networks also means to be attractive for the researchers and the investment that comes from the outside”, the report points out.

There will be a switch from ‘brain drain’ to ‘brain circulation’, and young researchers will be moving to various regions of the world, which will become educational and scientific centres. It is estimated that in 2025 there will be 645,000 Chinese students and 300,000 Indian students outside their countries. In turn, the number of European students that transfer to these two countries can also be expected to grow.

Europe needs good policy in order to retain its traditionally strong position in developing cutting-edge innovation that goes beyond incremental improvements of existing technology. It will be essential that some key governance issues are solved. For instance:

The opportunities for further deployment of new Community instruments will only be realized if they can demonstrate their particular value for Europe in terms of administrative flexibility and best practice governance. Only then will they play a central role in structuring a new, post-crisis augmented European Research Area (ERA).

Will the Looming Crisis Be Averted in Time?

If issues of effective governance at EU level are not addressed as ones of absolute priority, the crisis shock might actually go the other way: increasingly questioning the value of Community research and leading to a future ERA that is much more based on the member states’ national efforts at attracting research talent within their own borders.

The stimulating contributions and discussions of this expert group have paved the way for a broad debate at European and world level. This prospective analysis contributes to understanding, anticipating and better shaping future policy and strategy developments in the European Union.

Forward-looking approaches help in building shared visions of the future European challenges and evaluating the impacts of alternative policies. A qualitative and participatory method (‘foresight’) combined with quantitative and operational methods (‘forecast’) allows better long-term policies to develop, like the post-2010 European strategy and the European research and innovation policies. Through its Seventh Framework Programme (FP7) with its ‘socio-economic sciences and humanities’ theme, the European Union is funding forward-looking activities with around EUR 30 million.

Based on the report ‘The World in 2025 – Rising Asia and socio-ecological transition’ (Publications Office of the European Union, Luxembourg, 2009) and information from the European Commission.