Five scenario building workshops were organised in autumn 2008, each involving students of different disciplines and a school class. In the workshops, the lay participants developed scenarios on the future development and use of genetically modified crops and foods in Germany. The underlying driving forces and the resulting opportunities and risks were discussed. The aim of the project was to develop and test a new approach for scenario building workshops with laypeople and to contribute to the debates on future research agendas for genetic engineering in the agriculture and food sector.

The Context: Controversies on GM Technology in Agriculture and Participatory TA

Genetic engineering has been one of the most controversial modern technologies for quite a long time, and the cultivation of genetically modified (GM) crops is an important area of conflict in Europe. Key words describing the current situation are the increasing use of GM crops worldwide, reluctance of introducing GM crops in Europe, open questions concerning the coexistence of transgenic crops with conventional and organic farming, the ongoing development of new GM crops with new traits, and complications within the existing EU regulations. The future development and use of GM crops in Europe (and in Germany) is characterised by high uncertainty, thus creating the opportunity to develop different scenarios.

In the past, participative technology assessment (TA) activities on this topic – such as stakeholder discourses, consensus conferences, citizens’ juries, public meetings, and public debates – took place in different European countries. They mainly focused on the first generation of GM crops. First generation means the currently used GM crops exhibiting herbicide tolerance and/or insect resistance. Furthermore, the debates have centred on issues of current concern while the assessment of possible future developments is less developed and scenarios have not been applied in this context.

In spite of the uncertainty of future developments, scenarios have also not been employed in other assessments of GM plants and food so far. What we have is vision papers on future research agendas and on the opportunities of modern biotechnology that do not really reflect the societal and political discussions about this topic.

The overall objectives of the project were to contribute to

The project addressed both young people in education and laypeople in the area of GM crops and foods (Meyer et al. 2010).

To inform the workshop participants, the project group drafted 23 fact sheets (of 4-6 pages) in advance, grouped into four thematic complexes:

The fact sheets describe the current knowledge and include different disciplines, varying assessments and controversial perspectives of stakeholders. The aim was to draw up information sheets that are comprehensible to laypeople. Draft fact sheets were commented on by scientists and stakeholders to ensure an appropriate and balanced description.

The workshops followed a common procedure comprising the following steps:

The workshops’ results were documented, and the project group undertook an evaluation by comparing the outcomes of the different workshops.

The comparison of the workshops’ results shows that the possible futures of GM crops and foods in the assessment of the laypersons are not only characterised by the polarisation of “utilisation versus non-utilisation”. The scenarios constructed in the workshops include a number of visions between these extremes. Additionally, the scenarios describe not only developments in one direction but also include disruptions where the originally increasing spread of GM crops is reversed. The scenarios of the five workshops can be grouped into four categories of future developments (see figure):

The scenarios contain differentiated statements, amongst other things, on regulation, research, utilisation, acceptance, coexistence, freedom of choice, risks and alternatives. 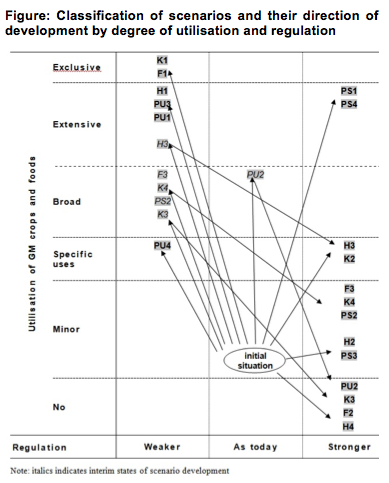 Five scenarios describe a reversal in the utilisation of GM crops and foods. This is an indication that development paths involving the reduction of regulations can be unstable – a sustainable development is not assured. These scenarios have a tipping point where weak regulation is replaced by strong regulation or GM crop cultivation is abandoned altogether. In the period under consideration, the shift in the regulation regime results from the discovery of new risks and changes in acceptance.

The workshop participants see a strong influence of different stakeholder groups on the future development of government regulations on GM crops and foods. The influence of companies and lobbies is contrasted in an ideal-type manner with the influence of civil society and citizens or voters. Besides the actors, (health) benefits and scientific insights about risks are considered key issues that influence political decisions, via the public acceptance of GM crops and foods. In this respect, risk assessment and its standards (and the issues of regulatory approval that this involves) are contested – a controversy that unfolds between scientific substantiation, stakeholder influences and the political shaping of regulations.

Coexistence, freedom of choice and alternatives

In the scenarios, successful freedom of choice for consumers and coexistence of different agricultural production systems not only depends on an adequate regulation of such coexistence. A broader framing is used: Research activities and favourable general economic conditions for agricultural production systems not using GM crops (such as conventional and organic farming) have to be maintained in the long-term to guarantee freedom of choice. In the perception of the laypeople, the future development of alternatives in agriculture and food supply is determined strongly by research investments and research successes.

In all scenarios reversing the trend toward GM crop cultivation, insufficient coexistence regulations and/or regulations that do not work well are assumed for the period of growing GM crop cultivation. The consequence is that at the end of this period – at the tipping point – freedom of choice no longer exists or at least alternatives, such as organic farming, will have been neglected. There are major difficulties in shifting back to a GM-free agricultural production at this point where health or environmental problems pertaining to GM crops lead to the reversal.

The participants take a negative view of a situation where utilising GM crops goes along with diminishing freedom of choice (overall 7 scenarios from five workshops). In contrast, maintaining alternatives is seen as positive. Arguments supporting the latter are consumer sovereignty and openness for future adaptability.

Some scenarios make a number of differentiations in regard to coexistence. Successful coexistence is questioned especially for crops with high outbreeding potential and for agricultural landscapes with small field structures. Additionally, the scenarios see chances that restrictive coexistence regulations might induce innovations.

Based on the scenario results and the workshop discussions, the project group has worked out recommendations for research and political agendas in the area of GM crops and foods. The following points were identified as important (Meyer et al. 2009):

The development of new GM crops should concentrate on applications with benefits for individual consumers or for society at large (such as supporting the adaptation to climate change). This is an important precondition for higher acceptance by consumers and citizens.

In the case of an increased cultivation of GM crops in German agriculture, this could be an unstable process associated with risks of disturbances up to the point of failure. This is indicated by the scenarios of reversal. Therefore, policies pertaining to GM crops and foods should be shaped in a process of dialogue. Such dialogues should be open-minded and continuous and not only take place before the implementation of specific measures. A discursive policy approach is necessary despite the manifest controversial debates.

Scenarios envisioning the utilisation of GM crops only for specific purposes indicate that greater differentiation and GM crops with new output traits (such as functional foods or plant-made industrials) can gain importance in the future. The progress of technological improvement, development of acceptance, results of risk assessment, and need for regulation can be expected to vary for the different areas of use.

The long-term existence of alternatives to GM crops has a high priority for many workshop participants. Appropriate regulations for coexistence are seen as necessary but not sufficient. Research on different agricultural production systems (such as conventional farming and organic farming) and their further development and use should be sponsored to ensure that they are preserved for the future.

In the perception of the participants, the successful development and introduction of GM crops and foods is associated with an increasing number and a more diversified set of actors in this sector of research and economy. The currently small numbers of companies that develop and market GM seeds are judged negatively as a quasi-monopoly structure. Therefore, research funding should also support the emergence of new actors in research and product development.