This paper focuses on an analysis of the Millennium Project’s “Futures Research Methodology – Version 3.0” report with the aim of making it more meaningful and useful particularly for foresight practitioners but also for users in general. The compilation of future methodologies is assessed in terms of the understanding of the nature of systems implied in the method and what it suggests as the best means of influencing systems. The analysis aims at improving our understand-ing of the wide range of knowledge, practices and assumptions these methods convey and enhancing our ability to learn about futures and expand our horizons of futures knowledge.

The following analysis of the Millennium Project’s “Fu-tures Research Methodology – Version 3.0” starts from the claim that much of the sensitivity of an organisation derives from its members and their ability to flexibly apply different theories and methods. Practitioners need to pay more attention to theory and understand how the theory and the methods they use significantly influence the way they perceive their environment and the outcomes of strategic processes.

Figure 1 describes the landscape in which foresight methods are used. The figure identifies four distinct types of landscapes, two of which – engineering ap-proaches and systems thinking – have a long history, find widespread use and currently dominate thinking and practice in strategic management. The other two – mathematical complexity and social complexity – are not yet widely used and represent both a contrasting and a complementary view of how the future emerges.

Let me first clarify the differences in the basic assump-tions between these four approaches: The vertical di-mension looks at the nature of the possible ways of understanding systems and the horizontal one at the means of controlling or directing that system. In the vertical dimension, design is contrasted with emer-gence: engineering approaches and systems thinking represent design, and mathematical complexity and social complexity stand for more emergent processes. 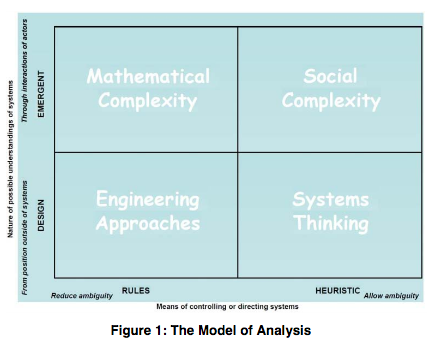 How sense-making is accomplished and what kinds of solutions are provided in moving across time and space is at the heart of the model of analysis. By design, we mean the ability of a manager, expert or researcher to stand outside the system and design the system as a whole. In case of emergent systems, the system cannot be understood or managed as a whole by a manager, expert and researcher, or by anyone at all for that matter, because the system emerges through the interac-tion of actors who act on the basis of local knowledge and their own principles. In the horizontal dimension, we contrast rules that reduce ambiguity with heuristics that provide direction while allowing for a degree of ambiguity that can adapt to different and changing contexts. There is a design element to emergent sys-tems but not in the same way as in the case of designed systems. That is to say, there are various ways to influence the evolution of emergent systems, but they can-not be deliberately controlled or directed by any single actor or group of actors.

Communicating the Properties of the Methods

We can take the next step by placing the methods in the sense-making model (Figure 2 below). The model works as an effective communication tool capable of delivering a large amount of information about the methodology of Futures Research Methodology – Ver-sion 3.0, the properties of each method as well as the relationships between the methods. The analysis reveals that most of the methods pre-sented in Futures Research Methodology – Version 3.0 are designed to reduce ambiguity. They concentrate on knowing, or to be more precise, on providing more knowledge to a decision-making process. Most of the methods adopt a position outside the system in order to bring new information into the system. Other types of frequently used methods are those that seek to create an awareness of possible futures and what they con-vey. The embedded conception of causality, of how things happen, is that there is an actor capable of dis-covering the causalities and designing interventions that will lead to a desirable future.

There are methods that explicitly or implicitly rely on different causal assumptions about how things happen. The methods placed in the upper half of the model share the belief that things happen through the (local) interaction of agents. The movement towards a future is seen to depend on the other actors, the adaptive moves of a single actor influencing other actors’ strate-gies by creating new possibilities and constraints. Comparing the number of methods found in the upper part of the model to the number in the lower section, this approach would seem to be less popular among futurists than its design counterpart. However, some methods are constructed with the aim of reducing am-biguity and simulating emergent options. The smallest number of methods lies in the social complexity square indicating that there are few methods trying to provide direction in a not always orderly environment while allowing for some degree of ambiguity. 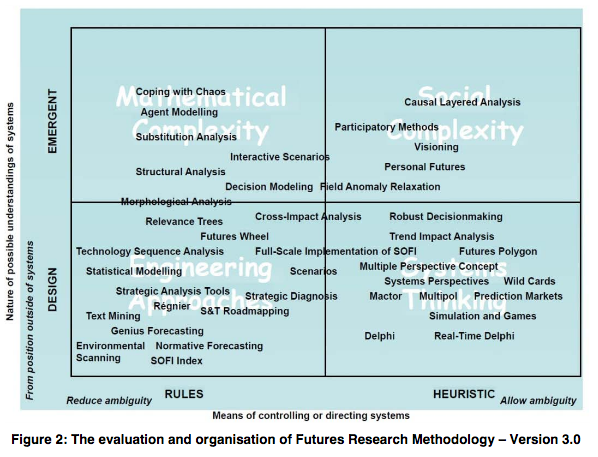 Next Steps towards More Conscious Strategies

We assume that the qualities of a method derive at least partly from assumptions about the basic nature of organisational life. The answers to these assumptions reveal three important properties of each method: how the method stands in respect to whether or how much managers are or should be in control, how ordered or chaotic the landscape where the actions take place is or will be, and finally what the means offered for shap-ing the future are.

It is perhaps correct to claim that methods presented in the lower left-hand square of Figure 1 are or have be-come well known and that they are also relatively easy to use. In the upper left-hand square, the methods are much more sophisticated; they often require some mathematical background and programming skills. Despite their sophistication, there exist some serious doubts concerning their capability of offering anything other than engineering approaches. In the lower right-hand square, systems approaches handle ambiguity better than more design-orientated approaches and offer more stability than emergent approaches but only work well in conditions where there are a limited number of interactions and the system can be designed. Finally, in the upper right-hand square, social complexity is presented as a field of possibility not yet fully utilized. It has not been widely adopted because its main strength is limited to dealing with poorly understood emergent, nonlinear phenomena and providing explanations and an understanding of a system’s direction in the absence of control of that system.

One more argument can be added to the ones pre-sented so far, namely that the business environment is becoming ever more complex. And one conclusion to be drawn from this should be that companies need to shift from ambiguity reducing strategies to ambiguity absorb-ing ones. All this calls for developing theoretical and methodological tools very different from those we use today. Such a shift would require incorporating emer-gence into our understanding of strategic processes and the possibility of a new kind of order arising from, or being found hidden within, complex phenomena, i.e. an order based on the tools and methods by which people make and unmake ordered and unordered worlds.

Download EFP Brief No. 180_Emergence and Design in Foresight Methods

Shaw, P. (1997) “Intervening in the Shadow Systems of Organizations: Consulting from a Complexity Perspective.” Journal of Organizational Change Management 10 (3): 235-250.

Snowden, D. (2004) “Innovation as an objective of knowledge management. Part I the landscape of management.” IBM Business Journal.