In this scenario study, we sketch the most important challenges for the Netherlands to remain an attractive place for business with high-quality production and a flexible labour market. The scenarios offer students, employees, companies and government guidance in preparing for the future. By definition, the future is uncertain and becomes more uncertain the further we look ahead. The scenarios for 2040 sketch four possible worlds based on two fundamental uncertainties: the size of cities and the division of labour in the workforce.

Sketching future worlds contains a strong element of storytelling, which is essential when investigating the future. Our stories are developed using anticipatory thinking where the aim is to develop a rich and detailed portrait of a plausible future world, including the challenges and opportunities that such an environment would present.

Scenarios provide a useful tool in a world that is uncertain and unpredictable. They reveal different possible futures that are plausible and challenging.

For a shorter horizon, quantifying the future might be feasible and meaningful. For a period of thirty years, we believe that quantifying the future becomes less important whereas developing scenarios about possible future images of the world gains weight. Forecasting future income growth is gradually replaced by presenting consistent and plausible pictures for future worlds.

Our work sketches the most important trends, the uncertainties around these trends, and stories about the functioning and non-functioning of the economy in the coming decades. We point to the trade-offs policymakers face when trying to solve problems arising from market failures. We show how policymakers today may prepare for developments in the future.

How will we earn our money in 2040? Policymakers are confronted with such questions. Decisions have to be made today based on current knowledge and cannot be made conditional on future events. For policies that can be changed rapidly, it is feasible to take action immediately and adjust the policy when it turns out to be the wrong one or when more knowledge about outcomes becomes available. It becomes another matter when policies have a long lead-time or when they involve investments with potentially large sunk costs. In such circumstances, policymakers have to trade off the benefits of waiting against the costs of delay. For instance, young people across Europe are paying the price for policymakers misjudging the trade-offs involved in labour market developments.

To provide an answer to the question of how we will make a living in 2040, scenarios help policymakers to consider and reconsider different options. Scenarios bundle historical developments, current stylised facts and trends into consistent stories for alternative futures. We have developed four scenarios to analyse how the Dutch economy may evolve. In building the scenarios, we split the question of how we will make a living into the questions of who earns the money and where the money is earned in 2040. People are considered in their role as workers while cities are viewed according to the type of production that occurs there and the connections that exist within and between them.

How do firms divide tasks among workers, and what will be the main characteristics of the workforce in 2040? What determines the size and structure of cities in 2040? The answer to both questions depends on the development of technology – the fundamental driver of future economic development.

Scenario Framework: From Specialisation to Generalisation

The horizontal axis in Figure 1 presents the options for the division of tasks; the vertical axis shows the possibilities for city size. The scenarios are labelled such that the first term reflects the characterisation of people and the second informs about the type of location. For example, the scenario in which workers specialise and city size is relatively small is labelled Talent Towns. 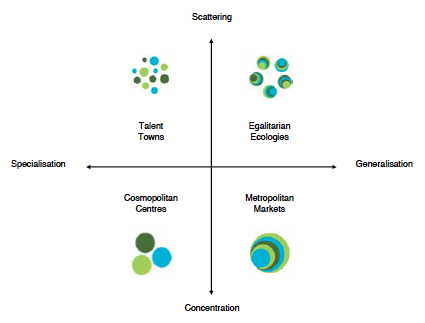 In this scenario, the economy is moving towards a task economy in which workers perform one or many tasks rather than producing one or only a few products. This implies a new division of work. There are two possible directions.

The uncertainty about cities is not about cities becoming more important since this is true in all scenarios. The question is one of size: will they be large or small. The first possibility is that cities become relatively small and are scattered across space. They serve as small economic and urban spikes. In this world, there are few reasons for economic activity to cluster. A second option has economic activity becoming highly concentrated in a limited number of large cities. Cities are the meeting places of people for the purpose of trade, the exchange of ideas, and the development of new technologies, but also to optimise the match between workers and firms and between producers and consumers.

Table 1 presents the most salient characteristics of each of the four scenarios. The table shows the implications of the scenarios for the size of the city, representing limited agglomeration benefits in Talent Towns and huge benefits in Metropolitan Markets. The scenarios are not only relevant to the Netherlands but also to the rest of the world. 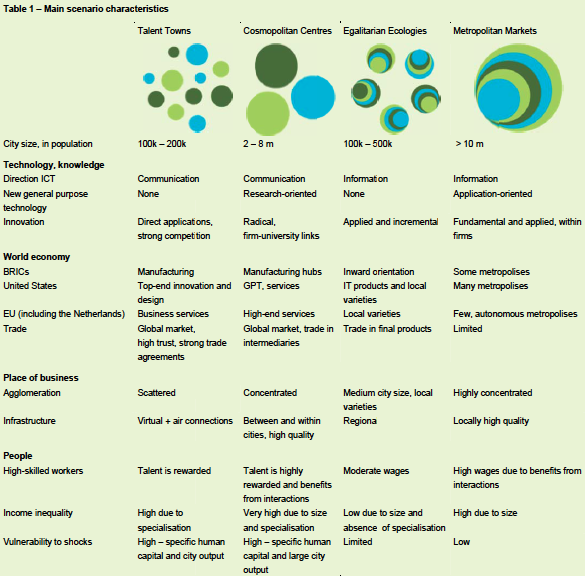 The scenarios offer guidance for long-term strategic policymaking. Technology determines the allocation of future production, which limits the scope for the government to intervene. The scenarios reveal that uncertainties in future production mainly involve uncertainty about the division of labour and about its distribution across space. This sheds light on today’s choices. For instance, investments in infrastructure should not only solve today’s traffic jams but should also take some account of possible future growth (or decline) of cities and the connections within and between cities. Public institutions for education, science and innovation have to look beyond today’s questions and consider the possibility that specialisation may become crucial. Finally, labour market institutions, although designed in the past, should anticipate future problems as well.

Regardless of how the future unfolds, it is necessary for cities to be able to develop more freely. Cities need more possibilities to pursue their own policies. In most areas good policy varies by scenario: