The Sectoral Innovation Foresight was part of the Sectoral Innovation Watch (SIW) project within the Europe INNOVA initiative. The foresight study aimed at exploring future developments in nine different sectors in order to identify potential policy issues and challenges of the future. The emphasis was put on developments that could possibly have a disruptive effect on the nine sectors under consideration, on the one hand, and on developments that are likely to be of cross-sectoral relevance to innovation, on the other.

The Sectoral Innovation Foresight was part of the Sectoral Innovation Watch (SIW) project within the Europe INNOVA initiative. Europe INNOVA was launched by the European Commission’s Directorate General Enterprise and Industry as a laboratory for the development and testing of new tools and instruments in support of innovation with the goal of helping innovative enterprises innovate faster and better. It brought together public and private innovation support providers, such as innovation agencies, technology transfer offices, business incubators, financing intermediaries, cluster organisations and others. SIW aimed at monitoring and analysing trends and challenges. Detailed insights into sectoral innovation performance are crucial for the development of effective innovation policy at regional, national and European levels.

The foresight on sectoral innovation challenges aimed to integrate foresight exercises to understand the dynamics of sectoral systems of innovation. The concept of sectoral systems of innovation and production (Malerba 2002) seeks to provide a multidimensional, integrated and dynamic view of sectors. A sectoral system involves not only a specific knowledge base, technologies, inputs and demands that determine its development, both trends and trend-breaking developments are also drivers of sectoral change. The interactions of the sectoral actors (individuals, organisations, networks, institutions at various levels of aggregation) are shaped by institutions and by drivers of change. Undergoing change and transformation through the co-evolution of its various elements, a sectoral system is affected by science and technology drivers and demand-side drivers as well.

In recent years, a growing number of projects on sectoral innovation systems and on foresight concepts and activities have been initiated while a growing body of literature has been published. However, the two areas remained unconnected. Within the Sectoral Innovation Watch, the connection between these areas has now been made. The aim was to develop methods of sectoral innovation foresight for the development of a future-oriented innovation policy by identifying key drivers, emerging markets and requirements.

Foresight, in the way it was understood in SIW, is not about predicting the future, but follows the approach of ‘thinking, debating and shaping the future’ (European Commission 2002). It thus aims at sketching different reasonable variants of possible future developments (‘scenarios’), the associated challenges, underlying driving forces and options for dealing with them. In order to achieve this, the foresight approach must look beyond current trends (which are nevertheless an important input) and, in particular, into qualitative trend breaks that can give rise to qualitatively different future development paths in the sectors under study. It is when these qualitative trend breaks are superposed that major changes in both innovation and markets can happen.

This foresight exercise intended to look beyond time horizons that can be addressed by simply extrapolating current trends. In other words, to look sufficiently ahead for major changes to happen while at the same time staying sufficiently close to the present to remain relevant to decision-making during the next couple of years. While for some fast-changing sectors this may imply a three- to five-year time horizon (e.g. biotechnology), for others (e.g. construction) a ten-year time horizon may be more appropriate.

The nine sectors under study in the Sectoral Innovation Watch were:

The main objectives of the sectoral foresight exercise can be summarised as follows:

A Sectoral Perspective on Foresight

Foresight aims at sketching different reasonable variants of possible future developments, the associated challenges, underlying driving forces and options for dealing with them. In order to achieve this, the foresight approach looks at driving forces, captured for instance in trends and trend breaks. Recognizing the fact that future developments are by their very nature uncertain and open to value judgement, foresight covers activities to think the future, debate the future and shape the future. It is thus not a tool for predicting the future but a process that seeks to develop shared problem perceptions, make differences in expectations explicit and identify needs (and options) for action.

For the purpose of the sectoral foresight exercise, the main building blocks of sectoral systems of innovation and production have been adjusted in order to integrate them with the foresight approach. This has led to a simple pattern of analysis, along the lines of which the sectoral foresights will be structured. The essence of this approach can be captured by the subsequent building blocks (see Figure 1, next page):

For the purposes of this exercise, we will refer specifically to 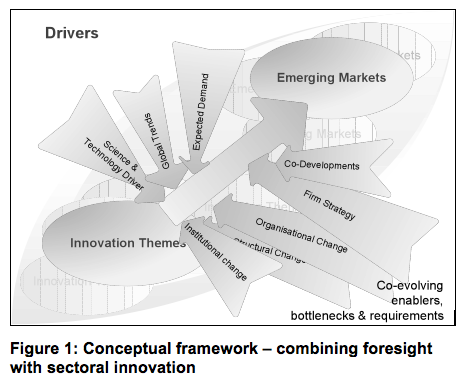 In addition to these four building blocks, the co-evolutionary dynamics of innovation and change in a sector are captured by way of scenarios. Scenarios are to be understood as plausible and at the same time challenging combinations of these building blocks in a future-oriented perspective. Due to the uncertainties associated with contextual developments as well as with all other elements of the innovation system analysis, it is essential to think in terms of several, qualitatively different scenarios of the future, especially if a time horizon is chosen that goes beyond the scope of extrapolating current trends and aims at qualitative changes. In particular, the interplay of different drivers and their mutual reinforcement can give rise to major, even disruptive changes in sectoral innovation systems, with major implications for firm strategies as well as public policy.

The SIW foresight exercise was implemented in four main steps and the results of these steps were integrated in nine sectoral foresight reports:

State of the Art Analysis

For each sector a review of secondary sources on foresight was carried out. This review covered, in particular, the situational analysis, the analysis of drivers of change, as well as a first view on innovation themes. The nine interim sector papers served as input to the workshop on ‘Sectoral innovation foresight: key drivers, innovation themes & emerging markets’ that took place on 23-24 June 2009 in Brussels.

This first workshop aimed at validating and deepening the findings on drivers and innovation themes but also at exploring first ideas about future sector-level scenarios and associated co-developments. Interim findings were presented and discussed in working groups that dealt specifically with each individual sector as well as with the main crosscutting issues. The discussions with and feedback from the sector experts across Europe helped validate the interim results on key drivers, innovation themes, related emerging markets and associated requirements, and thus contributed to identifying the crucial issues for the future. The first workshop was attended by 60+ key players from the nine sectors, including industry representatives, scientists, foresight experts and policy advisors.

On the basis of the results of the first workshop, the preliminary findings on emerging developments in the sectors were deepened. In particular, this phase evaluated the inputs to the scenario sketches from the first workshop and provided further input for the development of scenarios. Interviews were used to refine the understanding of the role of co-developments for the emergence of markets related to the innovation themes identified.

Scenarios played a central role at the second foresight workshop in December 2009. Moreover, cross-sectoral issues were addressed, like, for instance, common drivers of change across sectors or inter-linkages between them. The second workshop also aimed at extracting those issues that – from a forward-looking perspective – are likely to require policy attention. The second workshop was attended by 60+ key players from the nine sectors, including industry representatives, researchers, foresight experts and policy advisors.

The finding of commonalities across all sectors reveals what generic factors would be part of the basic pool of drivers to consider when aiming to for policy flexibility (‘robust policy strategies’) in the medium term. This will not reduce uncertainty but can improve preparedness against unforeseen developments while contributing to better policies focused on one single scenario (‘focused strategies’).

In general, there are four main axes that, according to the foresight exercises done, are likely to determine and organise to a large extent the future development of the sectors of interest of the Sectoral Innovation Watch. These are, in no order or priority, general macroeconomic conditions, government policy and intervention, science and technology advances, and the human factor understood as susceptibility of population and democratic systems to broad societal challenges. In addition to these four main axes, other important key organisers of future sectoral developments include energy consumption and pricing and global industrial dynamics.

The levels of income, aggregated demand and availability of capital are strongly related to macroeconomic growth. Here income must be understood as a factor that affects supply and demand factors. On the supply side, general macroeconomic conditions affect the cost and availability of financing, not only of R&D and innovation but also general investments in infrastructures and production systems. In turn, poor macroeconomic conditions affect employment and overall household income, thus influencing demand for goods and services across an economy. Despite the importance of innovation in the increase in total factor productivity and its effects on growth, the sectors under study are part of a larger industrial ecosystem where typical macroeconomic parameters affected by events beyond the industrial system produce chain reactions across sectors (i.e., the recent financial crisis). Close monitoring of interest rates, trade balances, and overall government expenditure and deficits at the national level must be considered in the design of any sectoral policy.

Government intervention in the form of regulation is one of the largest sources of uncertainty across all sectors. Its development and stringency along the business cycle is a major moderator of science and technology applications (innovation). Entire sectors (e.g. space) depend to a large extent on public procurement. The empirical analysis of the SIW on the role of regulation to moderate innovation confirms the important role of regulation on innovation performance. Empirical evidence indicates a positive relationship between regulation and innovation.

The foresight exercise conducted considered a large array of new technologies and innovation efforts likely to influence the direction and rate of growth in all sectors. Any sectoral policy must have a clear consideration of unexploited opportunities and technologies and innovation. An additional factor in this driver is the increasing pace of technological convergence that key enabling technologies bring. The set of foresight reports in the SIW have provided a broad account of current and near future innovations that will transform the sectors of interest to a certain extent.

‘Human factor’ refers to the susceptibility of citizens to very diverse issues that could be technology related or not. Important issues could be sustainability effects of consumption, travel behaviour, lifestyles, value given to health, safety, security, or risk technology perception, etc. Any demand-side policy targeting final or intermediate consumers or users of goods and services must take into account the susceptibility of the target population to a specific issue associated with the technology or innovation of interest.

The five factors described above form part of any robust policy that would ensure sufficient flexibility to face uncertainty and potentially haphazard sectoral developments.

This foresight brief is based on several sectoral foresight deliverables from Sectoral Innovation Watch. The two main sources concern: