This was the first time that Taiwan conducted a large-scale expert opinion survey using the Delphi approach. The goal was to identify research topics relevant to shaping the future of agriculture in Taiwan. Applying roadmapping, the project presented policy suggestions at the end of 2011. The suggestions have been incorporated into the Taiwanese govern-ment’s Council of Agriculture (COA) research agenda as evidenced by COA’s call-for-projects announcement.

The Role of Agriculture in Taiwan

Taiwan was one of the leading countries in subtropical agriculture several decades ago, but now agriculture has lost its importance in job creation, domestic production and international trade. However, agriculture is still at the root of the economy and has many functions beyond production – it provides the food we eat, conserves the environment we live in, and is a force for social stability.

Taiwan, with nominal GDP $427 billion US dollars and GDP (PPP) per capita $35 thousand US dollars in 2010, is known for its manufacturing capabilities today, but it used to be exporting a lot of agricultural products and technologies to many countries long time ago. Since 1959, more than 100 agricultural missions have been dispatched to more than 60 countries, among which about half missions are currently at work in Africa, the Middle East, Latin America, and the Asia-Pacific.

In fact, Taiwan’s total land area is about 36,000 square kilometers, most of which is mountainous or sloped. Therefore, agriculture is practiced mainly in the plains, which comprise 29 percent of the country. As a subtropical island characterized by high temperatures and heavy rainfall, Taiwan offers bio-diversities for agriculture, but also lends itself to the breeding of insects and disease. Particularly, there are frequently typhoons causing natural disasters in the summer and autumn every year.

There have been significant changes in Taiwan’s agricultural exports over the years however. Years ago, Taiwan exported sugar cane, rice, and canned mushrooms or asparagus. Now Taiwan’s main exports are aquaculture products (e.g. tuna, eel, tilapia), leather and feathers, and its main agricultural imports include corn, soybeans, wine, tobacco, cotton, lumber, beef and wheat. In 1953, the average value of agricultural production increased 7.3 percent annually and exports increased at a rate of 9.3 percent, but beginning in 1970, agricultural exports fell behind agricultural imports. In 2010, imports were USD 12.8 billion and exports were USD 4 billion. The production value based on agriculture is estimated approximately 11.2 percent of GDP, while primary production accounts for only 1.5 percent of GDP in Taiwan.

The Revitalization of Agriculture in Taiwan

The project aimed to identify R&D priorities to meet the long-term objectives for agriculture in Taiwan such as to improve farmers’ productivity and livelihoods, to develop resource-efficient and environmentally-friendly ways to do farming, and to ensure food safety by instituting a traceability system, which were embedded in a vision of making a better living in Taiwan in terms of industrial development, environmental protection and life quality respectively. 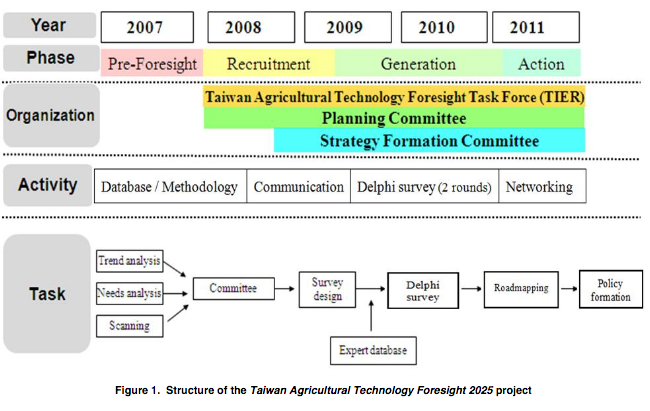 In 2008, TIER set up a task force with six researchers and two assistants to learn the foresight techniques, mainly from Japan. It built up a data-base of social needs, technological trends, research resources, critical issues and agricultural policies nationwide and worldwide.

Under the support and approval of COA, the project set up the Planning Committee, including government officers, agricultural experts, senior research fellows, social scientists and an economist. The Planning Committee decided that the project’s target year was 2025, and that the purpose of the foresight was to identify R&D priorities to meet the long-term objectives for agriculture in Taiwan such as to improve farmers’ productivity and livelihoods, to develop resource-efficient and environmentally-friendly ways to do farming, and to ensure food safety by instituting a traceability system, which were embedded in a vision of making a better living in Taiwan in terms of industrial development, environmental protection and life quality respectively.

In 2009, the Strategy Formation Committee proposed more than 100 research topics for the project. The TIER task force tried to consolidate some of them and organize them in a uniform format. Then, the Planning Committee identified the final 74 research topics and the related key questions for the Delphi questionnaire.

Based on the survey responses to 74 research topics, the project compiled the indices of industrial development, environmental protection, life quality, national priority and government support respectively to measure the research topics in different aspects. The standard deviations of all indices at the second round became smaller than those at the first round, so it implies that the Delphi survey of the project did converge for reaching consensus. 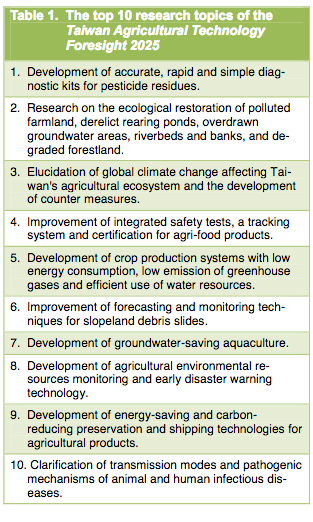 The survey shows that the government should support those research topics with higher ratings in environmental protection as well as in life quality particularly due to agricultural multi-function (externality). It is, however, slightly correlated between industrial development and government support to be needed for those research topics because some of them could be developed by the private sector. These research topics have been incorporated into COA’s research agenda as evidenced by COA’s R&D system call-for-projects announcement.

Besides, in order to attract the young generation to think about the future of agriculture, the project invited young people to participate in the Taiwan Agricultural Technology Foresight 2025 contest (see Figure 2). 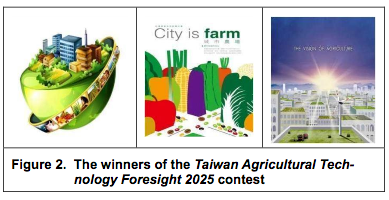 This was the first time that Taiwan conducted a large-scale expert opinion survey using the Delphi approach, in order to identify the research topics to meet the needs for shaping the future agriculture in Taiwan. The project made policy suggestions by road mapping at the end of 2011, and these have been incorporated into COA’s research agenda as evidenced by COA’s R&D system call-for-projects announcement.

The major contribution of the project has been the government’s support for the research topics of ‘national priority’ in terms of industrial development, environmental protection and life quality, with equal weights embedded in the vision of making a better living in Taiwan. The project is expected to improve farmers’ productivity and livelihoods, particularly for smallholders; to develop resource-efficient and environmentally-friendly ways to do farming in Taiwan’s limited land area; to reinforce the links between production and consumption of agricultural products by implementing a traceability system.