The aim of the European Environment Agency’s regular state of the environment and outlook reporting is to inform policymaking in Europe and beyond and help frame and implement policies. Information can also help citizens to better understand, care for and improve the environment. Global megatrends assessment complements the assessment of four European challenges (climate change, biodiversity loss, growing material use and concern for the environment, health and quality of life) while it identifies additional social, technological, economic, environmental and political factors beyond Europe’s control that are already affecting the European environment and are expected to continue to do so.

An assessment of global megatrends relevant to the European environment has been performed for the 2010 European state and outlook report prepared by the European Environment Agency (EEA) and a network of countries (EIONET). It focuses on identifying the most relevant global pressures on Europe. A global-to-European perspective is relevant to European environmental policymaking because Europe’s environmental challenges and management options are being reshaped by global drivers such as demographics, technologies, trade patterns and consumption.

While the future cannot be predicted with certainty, it also does not arise from nowhere. It is rooted in our present situation. Some trends visible today will extend over decades, changing slowly and exerting considerable force that will influence a wide array of areas, including social, technological, economic, environmental and political dimensions. While these megatrends cannot be predicted with certainty, they can be assessed in terms of plausible ‘what-if’ projections.

Mega-trends always include uncertainties or strategic shock factors. They can lead to a sudden slowdown or change of direction. This concerns especially events with low probability but far-reaching implications (so-called ‘wild cards’). In addition, a combination of sub-trends can emerge into novel megatrends over a longer time frame, for example several decades.

Many of these changes are interdependent and likely to unfold over decades. They can significantly affect Europe’s resilience in the long term. Naturally, such changes also offer unique opportunities for action. Effective measures, however, require better information and a better understanding of a highly complex and evolving situation.

The assessment grouped a rich diversity of information on global drivers of change into a number of social, technological, economic, environmental and political (governance) megatrends (see Table 1). It summarised key developments succinctly with the goal of triggering a discussion about how we should monitor and assess future changes in order to better inform European environmental policymaking. 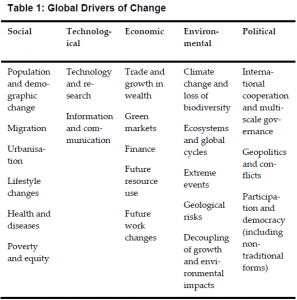 The approach utilised for this exercise included:

The complexity of interlinkages and manifold uncertainties inherent in megatrends require an exploratory, qualitative approach, underpinned by empirical data. It does not solely rely on quantitative modelling although already available model results are used in the analysis. Current approaches to risk analysis and quantitative forecasting are problematic since the systems at hand and their dynamics are not well understood, assumptions are often non-transparent and necessary data are not always available.

The selection of the final list of global megatrends has been determined by matching selection criteria of relevance, novelty, data availability and feasibility within the time frame of the assessment.

The analysis of global megatrends and their relevance to Europe’s long-term environmental context is being carried out as a longer-term and iterative process. The current report captures issues and results relevant to the context and timescale of the state and outlook report 2010. Further work will be undertaken during the next years – and this assessment process intends to provide a solid information base to support policy formulation with a long-term perspective.

Eleven global megatrends were selected to address the European environmental challenges in the area of climate change, nature and biodiversity, natural resources and waste, and health and quality of life.

The global population will continue to grow until the mid of the century but slower than in the past. People will live longer, be more educated and migrate more. Some populations will increase as others shrink. Migration is only one of the unpredictable factors for Europe and the world.

Living in an Urban World:
Spreading Cities and Spiralling Consumption

An increasingly urban world will probably mean higher levels of consumption and greater affluence for many. Yet it also means greater poverty for the urban underprivileged. Poor urban living conditions with the environmental and heath risks this involves can easily spread to other parts of the world, including Europe.

Risk of exposure to newly emerging and re-emerging diseases and new pandemics grows with increased mobility of people and goods, climate change and poverty. Aging Europeans could be vulnerable and at risk of being severely affected.

Accelerating Technologies: Racing into the Unknown

The breakneck pace of technological change brings risks and opportunities. These include, in particular, the emerging clusters of nanotechnology, biotechnology and information and communication technology. Innovations offer immense opportunities for the environment – but can also create enormous problems if risks are not regulated adequately.

Global Power Shifts:
From a Unipolar to a Multipolar World

One superpower no longer holds sway; regional power blocs are increasingly important, economically and diplomatically. As global interdependency and trade expands, so do international and bilateral agreements.  Europe may benefit from this development by improving its resource efficiency and knowledge-based economy.

How will Europe survive in the intensifying scramble for scarce resources? The answers may lie in more efficient production and use of resources, new technologies, innovation and increasing cooperation with foreign partners.

A larger and richer global population with expanding consumption needs will place growing demands on natural systems for food, water and energy. Europe may see more pressure also on its own natural resources.

Increasing Severity of the Consequences of Climate Change

The environment is burdened with an increasingly complex mix of pollutants that threaten the regulatory mechanisms of the earth. Particulates, nitrogen and ground-level ozone merit particular attention in view of their complex and potentially far-reaching effects on ecosystem functioning, climate regulation and human health. In addition, many other chemical substances are released into the environment, the effects of which – whether in isolation or combined – are still poorly understood.

The world is finding new governance models – multi-lateral agreements and public-private ventures, for example. In the absence of international regulation, advanced European standards and procedures have often been adopted worldwide. But will this situation continue in the future?

The analysis of global megatrends shows that they may have a series of direct and indirect consequences for Europe’s environment. These consequences can be illustrated by looking at the four priority areas that underpin the European Union’s Sixth Environmental Action Programme, namely climate change, natural environment, resource use, and environment and health.

The most evident consequences are expected in the area of climate change. A whole set of global socio-economic megatrends will play a key role in determining the severity of climate change impacts in Europe in coming decades. Projected direct impacts in Europe include biodiversity change, particularly in the Arctic region, the Alpine region and the Mediterranean. Water scarcity can become a problem in southern European regions, whereas flooding threatens lowland coastal areas and river basins. Indirectly, Europe may experience increased migration pressures from developing countries, where accelerating global environmental change is becoming more important as a direct root source for migration, and its ageing population may become more vulnerable to extreme events such as heat waves.

The links between global megatrends and their impacts on Europe’s natural resources are complex and uncertain. Europe is resource-poor in terms of fossil fuels (oil, gas) and minerals (e.g. rare earths, phosphorus, copper, aluminium) and will largely remain dependent on supply from abroad. For energy, Europe may turn to its own stocks (coal, oil shale, ‘revival of mining’), but exploitation costs will be high due to high costs of labour, environmental and occupational security, accessibility and landscape disruption. Changes in the abundance of migratory species and climate change impacts might be aggravated by an increased demand for and depletion of domestic resources (such as food and timber). Similarly, heightened global demand for European agricultural and forestry products may lead to an increase in the intensity and scale of agriculture and forestry in Europe, increasing pressure on water and soil resources. Technology, however, may act to reduce pressure on Europe’s natural resources by enhancing the efficiency of resource use and improving agricultural yields.

In addition to the direct and indirect consequences on Europe’s environment, the megatrends can be expected to also have a global impact on environmental security in many parts of the world, including Europe’s neighbours in the southern and eastern Mediterranean as well as in Sub-Saharan Africa. Examples of such impacts are climate-change-induced refugees, risk of new pandemics and new diseases, conflicts arising from competition for resources, development problems related to uncontrolled urban sprawl.

How Can We Respond to Global Megatrends?

The assessment of megatrends highlights a range of interlinkages and interdependencies. They increase complexity, uncertainty and risk and accelerate feedback within and between economic, social, technological and environmental systems. The growing global links also offer unique opportunities for action although the attempts to realise these opportunities face the challenge of huge time lags between action (or inaction) and effect.

Responding to global megatrends and reflecting future changes in policy is thus a challenging task. The report of the Reflection Group on the Future of Europe has emphasised how many recent global developments, such as the financial crisis or price volatilities in key commodity markets, have caught us by surprise.

A key question emerges: how can we respond to global challenges in resource-using systems when we are very far from understanding them completely? For example, much of the speed and scope of global environmental change has been underestimated by scientific assessments and policy appraisals. Few considered that some of the key emerging economies would develop so fast and affect global demand as quickly as they have in the last decade.

EEA, 2010a, ‘General support to framing the forward-looking assessment component of the European state of the environment and outlook report 2010 part A — Background Paper on Demographics and Migration’, European Environment Agency, Contract Number 3403/ B2009/EEA.53788 (unpublished).

EEA, 2010b, ‘Background paper on urbanisation and consumption— General support to the forward-looking assessment component of the 2010 European State of the Environment and Outlook Report (Part A)’, European Environment Agency, Copenhagen (unpublished).