The project goal was to develop a long-term vision and action plan for a sustainable European long-distance freight transport system by 2050, covering both transport policy and research and technology development policy. It aimed at bringing new knowledge (e.g. on climate change), perspectives (including from outside the transport sector) and stakeholder groups into an established field. Creating channels for communication between participants from business, policy, civil society and R&D to overcome sectoral boundaries was an explicit goal from the beginning.

The European Union faces the challenge to ensure economic growth and cope with limited transport infrastructure as well as increasing demand for freight transport in the years and decades to come. At the same time the transport system is supposed to become sustainable with a decreasing impact on climate change.

The Freightvision foresight focuses on a subset of sustainability aspects that are currently considered the most critical ones with regard to a sustainable European transport system and have failed to meet sustainability standards so far. These aspects are greenhouse gas (GHG) emissions, the share of fossil fuels, road fatalities and traffic congestion. They have been addressed specifically in the mid-term review of the European Commission’s 2001 transport white paper.

The Commission’s 20-20-20 goal to reduce GHGs and fossil fuel consumption and increase the share of renewable energy sources by 2020 along with the longer-term goal to reduce GHG emissions to 80% of the 2005 baseline by 2050 are tremendous challenges for the transport sector and particularly for freight transport.

DG TREN (MOVE) reacted to the overall goal and elaborated a new white paper. The financial crises and the rapid rise in energy prices led to new perspectives. Forecasts used before were outdated and business as usual scenarios had to be reconsidered.

The foresight focussed on long-distance freight transport in three modes: road, rail and inland waterways. The time horizon was set to 2050 in order to take into account climate change mitigation goals and the life cycle of infrastructures. Sustainable development should be envisaged in terms of GHG/CO2 reduction, reduction of fossil fuel use, less congestion and traffic accidents (particularly on roads).

The tangible output of the project was to consist of an action plan with recommendations for transport policy as well as for research, technology and innovation policy.

The Freightvision foresight was designed as a complementary foresight process. The process accompanied the whole project and assured that stakeholders’ expertise and perspectives were integrated into the support action.

The project was to profit from the team’s complementary expertise on:

In Freightvision, results from several quantitative models were fed into the participatory foresight processes. The results of energy models informed the oil price scenarios; a congestion model and a CO2 emission model were used to analyse the impacts of reduction scenarios and assess policy measures.

Because the project provided a strong quantitative evidence base and integrated different strands of evidence by involving practitioners and including scientific expertise, deliberative participation and learning in large group settings led to well-founded results.

Stakeholder participation in this case was defined as invited representatives from research, business, policy and civil society taking part in a strategic dialogue on long-term issues. The stakeholders were explicitly involved as ‘experts’ based on their practical knowledge. The expertise of participants was treated as deliberative input to shape the content and tangible results of the foresight process, leading to robust scenarios, recommended action plans, visions and background reports.

The project intended to take a holistic approach that addressed all aspects of the future challenges, i.e. infrastructure, ITS, propulsion systems, vehicles, fuels, interoperability etc., and considered all types of criteria in the solution: research, technologies, policies and pricing. The invitations were issued so as to ensure that a balanced mix of participants represented all relevant areas and that no group of stakeholders or mode of transport was over- or underrepresented.

The Freightvision process was organised in four highly interactive stakeholder expert meetings (fora) with up to 90 participants in each one. Given the large group settings, the goal of encouraging deliberation and the network-building function of the fora, the foresight relied on an overall architecture that had to be tailored to purpose. The methods applied in the group process were borrowed from the field of organisational development (OD) research, which focuses particularly on changes in the thinking and action of stakeholders. Applying OD concepts and instruments throughout all phases of the foresight aimed to maximise interaction, collaboration, deliberation and learning among stakeholders.

The four fora took place during a 12-month period from 2009 to 2010. They were designed around participative sessions where a maximum of 10 participants were seated at a table and each table discussed specific questions under the auspices of trained moderators. The stakeholders discussed project results, refined, adjusted, integrated and assessed the work of the project consortium, and collectively developed scenarios, visions and an action plan.

Modelling was used in four cases:

The model results – although often described as “forecasts” – were never used in the sense of predictions since such forecasts are most likely to be wrong. Instead, the results were used as a basis for discussions and a means of becoming clear about dimensions and relations (e.g. the emission reduction potential of transport modes). Awareness was raised that while model assumptions have to be made explicit, they are necessary to come to a manageable amount of scenarios in the process.

The projects led to a fully fledged foresight process including methods and techniques such as desk research, modelling, visioning workshop, scenario development, backcasting, wild card analysis and impact assessment. Figure 1 illustrates how the methodologies and particularly how modelling was integrated into the foresight process. Modelling was a part of each step of the project. The foresight forum meetings took place after each project step, and the modelling results and other findings were used and discussed in the fora. Apart from publishing research results in detailed work package reports, more comprehensive briefing documents (management summaries) were sent out to the participants prior to the fora to make knowledge flows more effective and transparent. 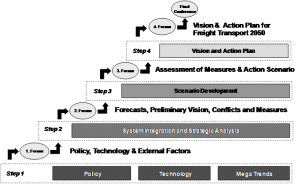 The process resulted in three stylised projections for each of the four sustainability criteria GHG emissions, the share of fossil fuels, congestion and accidents by 2050. The project proposes a long-term vision and a robust and adaptive action plan, developed in a joint effort by the project team and relevant stakeholders, for both transport and technology policy for sustainable long-distance freight transport in Europe.

Reaching the GHG reduction targets when taken seriously will have a tremendous impact on freight transport. It became clear that the EC goals for reducing GHGs will be the most important driver of freight transport policy over the coming decades and can be expected to dominate other EU-level transport policy issues, such as congestion and accidents. Containing GHGs from road transport will require the most efforts in the process. The modelling exercise showed that, even if volume could be doubled and electricity is produced by low carbon sources, rail freight transport would only contribute to reduction targets to a rather small extent.

Quantifiable targets for the sustainability criteria (Tab. 1) were formulated in correspondence with the models where available. Targets were set for GHG emissions, the share of fossil fuels, congestion and accidents. Preliminary targets were assessed based on the action scenario (developed in a backcasting exercise), a conflict and feasibility analysis and a wild card analysis.

GHG-reduction goals are tremendously challenging and dominated the debate about policy measures. Some of the most important conclusions were:

The normative part of the foresight produced 36 measures related to road transport, rail transport, inland waterways and maritime transport, supply chain, energy supply and vehicle suppliers. Some of the most important solutions for the reduction of GHG based on the SYKE model were:

Table 2: Key characteristics and the most effective policy actions

Given the challenging but feasible reduction targets for GHGs, all of the above-mentioned policy actions would have to be implemented within a four-decade time span. Obviously, this has a number of critical implications both in terms of single actions as well from a systemic perspective.

The advantage of a large group in a foresight process is the involvement of a broad range of policymakers and stakeholders, who are key players in shaping the future. To reach a shared vision for the future is probably the most critical factor for a transition to take place. Participation of key players increases the potential to reach consensus and form new networks or link existing ones to face new challenges.

At the same time, working in large groups increases dissent. Necessary changes might threaten established positions and networks. However, carefully planning each forum can limit the threat of conflicts that might undermine the success of the foresight process.

In Freightvision, controversies between stakeholders and within the Commission went beyond what would be expected for a FP7 project that has no direct influence on formal stakeholder consultation processes. Some stakeholders of the rail mode were particularly critical as the role of rail transport in reducing GHGs turned out to be less important than expected. However, the detailed process design, its transparency and the clear communication of the results of the qualitative and quantitative research helped to keep controversies at a constructive level during the project.