This brief provides methodological insights and lessons learned from experiences with a forward looking multi-actor engagement method that supplies policy advice for framework conditions of research and development (R&D): CIVISTI – Citizen Visions on Science, Technology and Innovation. This qualitative demand-side method cross-links knowledge of lay persons, experts and stakeholders. A national case study on the future of food illustrates the process with exemplary results.

Results of futures studies are often controversial, divergent or even contradictory, and thus become contested (Grunwald 2014). As technological change is rapid, expert anticipation beyond short-term prediction is highly arbitrary. There is a need for broadening the (political) debate on socio-technological development since many actors within the current debate focus on expressing the promise of multiple added values – economic and social – of technological progress. Such a socio-technical imaginary may prescribe a future that seems attainable to the ones involved in the visioning process (Jasanoff/Kim 2009). However, other possible futures may then become less likely and shaping them could become more difficult. Here, engaging citizens as well as involving experts and stakeholders may serve for combining different types of knowledge to build desirable, socially robust futures.

Within this setting, it may be alleviating to ask how the future should look like, instead of merely developing deterministic models to predict how the future will be. Such desirable prospects may then serve as stimulant for the contemporary discourse on governing innovations actively and responsibly in terms of responding to societal needs and challenges.

In this brief we will present and discuss a forward looking multi-actor engagement method that allows for integrating different kinds of knowledge of multiple actor groups into Science, Technology and Innovation (STI) programme development.

The transdisciplinary, qualitative foresight method CIVISTI is a demand-side approach that identifies societal demands for future developments. Applying the method creates a space where different actors can become mutually responsive to each other. Hereby, it supports what Warnke and Heimeriks (2008) describe as a continuous policy learning process that is not predetermined but open to foster the development of a system which may cope with future uncertainties. “The CIVISTI method is based upon the idea that the process of defining relevant and forward-looking research and innovation agendas could, in many respects, be improved by including consultations with citizens in their development. The method uses citizens’ concerns about societal development as a stepping stone for developing priorities in research programmes” (Engage 2020 2015).

Generally, the method relies on three recursive steps: (1) citizens develop visions of desirable futures, (2) experts elaborate recommendations on the basis of the visions, and (3) these results are then presented again to the citizens for validation before they are presented to addressees (Gudowsky 2012). The method was developed during an FP7 project (2008–2011), tested in seven countries and aimed at creating recommendations for European R&D policy, namely Horizon 2020 (civisti.org). Afterwards, several adaptations to international, national and regional level as well as to different topics took place (e.g. Gudowsky/Sotoudeh 2015a, b). The design and organization of the creative vision building and assessment in the CIVISTI method allows for the integration of citizens’ tacit knowledge alongside experts’ and stakeholders’ knowledge into framing R&D agendas.

The participatory foresight study “Future Foods for Men and Women” engaged citizens, experts and stakeholders to discuss the future of the (Austrian) food system (2013-2016). The study uncovered emerging issues and future challenges, including matters of food safety, production, processing, distribution and consumption, before elaborating scenarios which depict the main findings of the transdisciplinary process. Aimed at proactively shaping the long-term research program of the Austrian Agency for Health and Food Safety (AGES), results are also relevant to decision-makers in innovation and food policy as well as research and development experts and engineers (www.ages.at/futurefoods/).

In 2014 Citizens in four different regions in Austria developed visions of the food system with a view to a desirable future in 30 to 40 years. Information material was developed by the AGES communication team to inspire citizens to think about future food safety. Five creative workshops with 20 to 25 participants each took place in Vienna (twice), Linz, Graz and Innsbruck. Participants were chosen according to standardized criteria (age, education, occupation, sex, city/country residence) to achieve a composition of maximum heterogeneity. Based on values, hopes and fears incorporated in their visions, multidisciplinary teams of experts and stakeholders related to AGES formulated tangible recommendations for research programs. Visions and recommendations were then merged in scenarios to facilitate the communication of results to citizens and decision makers at a later stage. Scenarios were presented for validation and prioritization to ensure legitimacy of results. A final policy workshop engaged policy makers to ensure that results were applicable to current program building (see table 1). 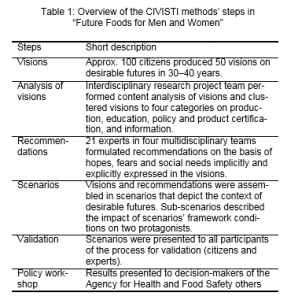 There are several intermediate results (e.g. visons, recommendations, scenarios), which can only be presented as excerpts. The analysis of visions showed that some similar topics were discussed in several forums. The topic of education and awareness has played an essential role not only in visions in all forums, but also in experts’ recommendations which are based on the visions.

Vision title: “Production of food is not only based on economic profits”

What are the benefits and advantages associated with the vision?

Themes and values to be considered that have been identified in this vision are: Regional cultivation, a critical look at global structures, new employment models, resolution of urban structures.

Experts’ recommendation that addressed this vision is named as “Paradigm Shift”:

The society learns to reduce consumption and do without over-sited grocery stores, etc.

We learn to use agricultural know-how and to take processing and preservation into account (away from greenhouse, agriculture that is too extensive). Challenges and issues to be addressed:

Citizens’ visions and experts’ recommendations were used to build comprehensive scenarios for the years 2035 to 2050.

This scenario describes “A paradigm shift by means of using the knowledge of resource conservation in agriculture.” The scenario is based on the following framework conditions:

In this scenario two main situations compared with existing conditions are distinguished: Voluntary society (Scenario 1a) and strengthening governance of markets (Scenario 1b).

This scenario is focussed on “consumers’ free choices supported by precise information on products in the free market. This scenario assumes the following framework conditions:

The impact of the scenarios’ framework conditions on the lives of two protagonists was illustrated in approximately 30 sub-scenarios. Citizens validated this set sub-scenarios as well as the scenarios itself. Based on this validation experts developed recommendations for research and policy (forthcoming).

Establishing Networks with Addressees as a Success Factor

A particular strength of the project was the close connection of the process to a large body of expertise, namely AGES. This guaranteed access to a group of experts and stakeholders who are directly involved in education, research and health security as well as policy, thus allowing for defining recommendations. As a result, experts were motivated to engage in interdisciplinary discussions, which in turn facilitated the interdisciplinary working phase and the expert/stakeholder workshop.

In order for the process to be able to connect different forms of knowledge, an essential criterion is for experts to have experience in transdisciplinary work and respect citizens’ visions as a basis for the process. Another strength are the main addressees of results, i.e. AGES itself, who closely collaborated within the process. Con-sequently, results are more likely to be considered and therefore have an impact on e.g. the long-term research agenda. This is especially important since a lack of close connection to relevant addressees can represent a major challenge to such a participatory process.

The key success factor is the design of creative and well-functioning communication at each phase. This case study held five citizen consultations in four different cities, which opened the possibility for optimization of the process and allowed for comparison of results based on the same information material and method. The method delivers new knowledge and cross-links different existing forms of knowledge, but should also be understood as a comprehensive communication method; as a result there is the need for sufficient resources, i.e. training of moderators, preparation of information material, time for assessing visions and recommendations. If these resources and competencies are not available, it may be more useful to work with small focus groups.

The presented method is further developed and applied within the project CIMULACT – Citizen and Multi-Actor Consultation on Horizon 2020 (www.cimulact.eu), which aims at shaping EU as well as national science, technology and innovation policies through agenda setting based on societal needs by engaging more than 1000 citizens, several stakeholder groups as well as policy makers in 30 European countries.